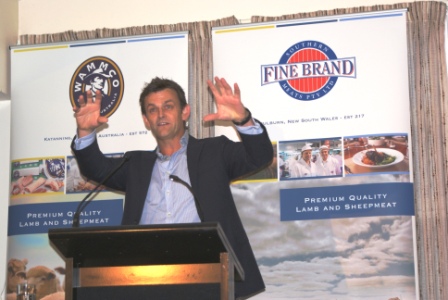 A plentiful supply of lambs, improving markets and a more favourable dollar resulted in a profitable 2012/13 season for WAMMCO, with more stable prospects ahead, CEO Coll MacRury told a big gathering of cooperative members at the Mount Barker AGM on October 23.

Coll said signs of a rising A$ were offset to some degree by an indicated reduction of a further 2 million lambs out of New Zealand and improving global demand.

The rapidly rising demand for lamb and mutton product in China was now an important factor for WAMMCO, especially with the cooperative’s successful takeover of Southern Meats, Goulburn.

China still maintains a ban on chilled Australian product but has dramatically increased its buying of offals and lesser cuts and this has greatly improved our profit baselines for both Katanning and Goulburn.

Coll said WAMMCO's commitment to keeping pace with processing technology was also keeping the cooperative in the global meat business by enabling it to target 'top end' markets. He foreshadowed further upgrades at Katanning particularly to boost chiller capacity.

A chance meeting between Coll and Aussie cricketing legend Adam Gilchrist whilst travelling east resulted in a unique presentation by Adam on highlights of his career at a 'lamb and lager' finale to the AGM. Adam invited an enthusiastic interchange with many WAMMCO members from the Great Southern.