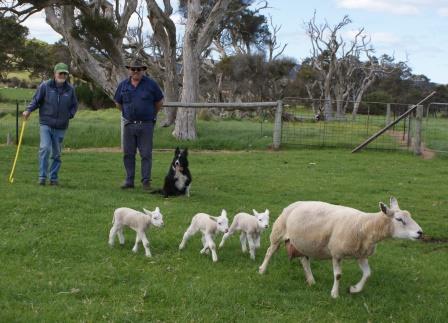 Another Texel/SAMM Win For Albany Breeder

WAMMCO's Producer of the Month for August 2014, Lower King producer George Clark, is confident that the Texel breed he helped to introduce to WA, will have a continuing role in the evolution of the State's lamb industry.

And he would like to see more younger farmers returning to sheep and lamb production.

"It was not so long ago that you were doing really well if you got $20 for a lamb," he said.

"Today we have a marketing structure promising $5 or more per kg on a regular basis, we have the genetics to breed profitable lambs in any environment, we have the pasture and feeding technology to achieve virtually whatever carcase we want, - all for a relatively small investment.

"With such a positive backdrop, there is a ready opportunity for young farmers in particular to capitalise on the sheep industry."

George Clark retired from the pharmacy business in Albany to go farming in the mid 1990's, teaming up with stud Texel and Q-Lamb pioneer Alan Jarman and his associate Graham Sutherland.

"Our 'Braeside' stud was based on my 140 acre property at Lower King and obtained some of the first Texel embryos to come to this State, later allowing us to supply the Dutch-origin Texel genetics to many West Australians."

Alan Jarman's early commitment to weight and grade selling provided an ongoing example for George, who has sold his lambs over the scales to WAMMCO for many years.

The winning line for WAMMCO's August 2014 title consisted of 159 Texel/SAMM cross lambs that averaged 22.6 kg and returned $120.68 per head including skin.

"The lambs were amongst the first kill as Katanning re-opened in August and the price was about $1 per kilo lower than we received for a smaller draft of lambs in July, just before the shutdown" George said.

It was significant that all 159 lambs - except one - were in either the fat score 2 or 3 categories.

"We have never sold a fat score 5 lamb off the property and fat control continues to be a major attribute of both the Texel and SAMM," George said.

With the help of retired former farmer Geoff Waters, he continues to run a flock of about 130 ewes comprising 50/50 Texel/SAMM genetics, together with a prized herd of Angus breeders on the highly productive property.

"And they easily achieve lambings of 150 percent for us each season with relatively little trouble."