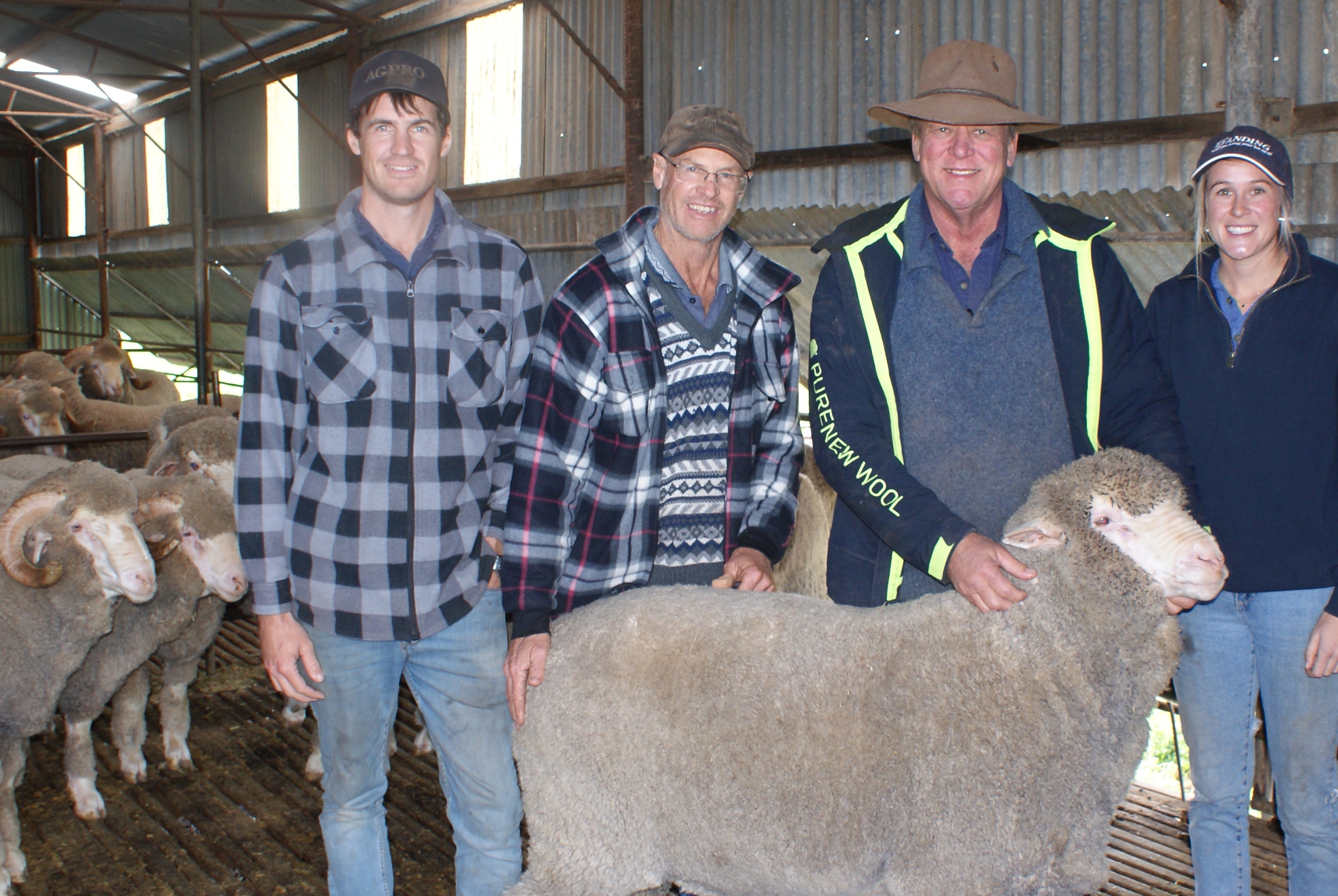 Impressive gains in sheepbreeding to enhance the unique dual purpose capacity of the Merino breed, have been applauded by WAMMCO’s Producer of the Month for June 2021, Darrel Hudson of Yleena Farm, Dowerin.

No stranger to achieving top prices from WAMMCO for their lambs, the Yleena Farm partnership of Darrel, wife Diane and son Peter were amongst the first West Australians to score $125 per head when they won Producer of the Month title for June 2010 with 232 Merino/Poll Dorset lambs.

A decision in 2017 to replace the Dorper component of the prime lamb business with Merinos saw the remnants of a SAMM/Dorper breeding plan, a draft of 238 ewe lambs, average $155.91 to take the Producer of the Month award for July 2017. Then in May 2019, the Hudson family was again Producer of the Month with a line of 131 SAMM/Dorper lambs that returned an average of $156.48 and achieved a 98.l47 percent, WAMMCO premium rating.

The prime lamb venture now consists of Merinos and a core breeding flock of SAMMS and Charolais ewes with rams sourced from Steve Slaters’ Margan SAMM/Charolais studs at Donnybrook.

A return to the Dowerin property in 2017 by son Peter, from a career in woodworking, allowed Darrel Hudson more time to spend on the family sheep enterprise – and in his new role as Dowerin Shire President.

Darrel said the Yleena decision to return to Merinos with the purchase of 400 ewes to lift wool quality and quantity and a shift to Brett Jones’ nearby Ejanding Merino stud for rams, had revealed a high degree of breeding progress and productivity for the Merino as a dual purpose breed.

“Sharing an increasing flow of data with Brett Jones , via Ejanding’s close association with the MLA-sponsored Merino Select and increasing recognition of Australian Sheep Breeding Values has confirmed the quantum leap taking place in advancing both the wool and meat values for Merino sheep,” he said.

Not only has our wool quantity, quality and profitability improved, we are also seeing some excellent results on bodyweights, eye muscle, meat eating quality and a steady improvement in lambing performance as a direct result of having this ‘whole new box’ of breeding tools.

An unprecedented season like this could produce even better results than we are seeing at the moment.

“The new breeding system is taking most of the guesswork out of sheepbreeding because you know that in most cases, you can achieve the changes you are seeking,” he said.

At a meeting with Darrel and Peter Hudson on Ejanding last week, Brett Jones said finer microns were an example of the widening viability gap in Merino breeding values.

“We have so far lowered our micron count by 4-5 microns to 18-19 microns with a significant improvement in viability and no loss of production or fertility,” Brett Jones said.

With breeder confidence rising rapidly in these new systems to coincide with many advances in electronic measuring and recording flocks, there is now a need for producers and processors to work more closely to maximize benefits for everyone.

“This applies to WAMMCO with the pending use of the new DEXA data system now nearing completion and how it might be integrated with on-property automatic drafting/tagging systems,”

He said advances in sheepbreeding and management systems, together with ongoing buoyancy in world red meat markets, were factors already attracting increasing interest from young producers.

Darrel Hudson said WAMMCO’s two-tiered pricing system for Merino and crossbred lambs was already under scrutiny and the time was right for the cooperative to review its policy position.

“Other processors are already rewarding the increasing value of Merino lambs to match crossbreds.”

“Whereas we have always recognized the need for WAMMCO to enable producers to make good money in bouyant conditions, we also accept that as our key underwriter, the cooperative must remain viable.”