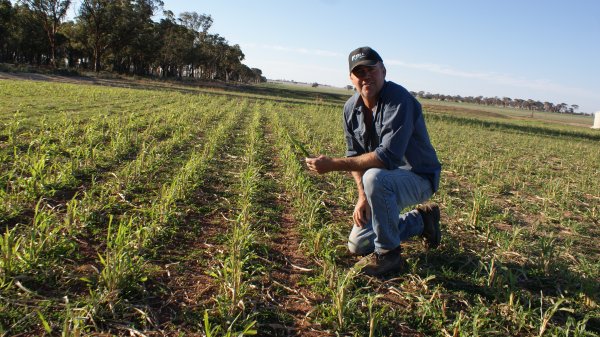 The Robinson family of ‘Bedar’ in the shadow of Woondillon rock at Babakin, have capped the ‘best-ever’ dollar returns from their sheep enterprise that coincided with a timely sequence of farm business decisions, to win WAMMCO’s Prime Lamb Producer of the Month title for May 2017.

Their winning line of 180 Afrinos and White Suffolk lambs was processed at WAMMCO Katanning on May 10 to return an average of $136 per head including skin, with 98.3 percent of the lambs fitting the cooperative’s premium grid. A bigger line of 445 lambs delivered to WAMMCO last week, averaged 24 kg to to return $150 per head.

Grant Robinson said a decision ten years ago to venture away from their family history of breeding merinos over the past three generations in favour of Afrino genetics from South Africa, was the first significant move.

“Wool prices were in the doldrums with few prospects for a recovery, and prime lamb production was the best option for producers like us who remained committed to sheep and wanted to retain a quality wool component.

“Afrinos were bred to cope with the dry conditions of the South African veldt country and offered easy care, good wool, prime meat and durability with lambings of around 120 percent.

“Most of our 2,000 ewe flock is now now pure Afrino and we are mating them back to Afrino rams we now breed ourselves, together with some White Suffolk rams purchased off-farm.

The second decision to plant a 130 hectare summer crop of of the forage sorghum variety “Sprint” in three separate paddocks to allow rotational grazing, was rewarded with 200 mm of rainfall in January and February, guaranteeing the ewes would thrive into the current lambing.

The 2016 season saw the Robinson family along with many others in the wheatbelt heavily affected by frost. This led to a decision to swath and bale 150 ha of totally frosted wheat and barley.

“Our timing was obviously fortunate because a high sugar content made the hay very popular with the sheep and lambs,” Grant said.

Son Luke, a qualified electrician, is now full time alongside Grant and Barnadette pm the Babakin property and was working with Grant and local Elders trainee Kate Varis from Corrigin to prepare another draft of lambs for WAMMCO last week. Sister Catherine is at Curtin and younger brother Aaron recently completed an auto electrician apprenticeship.

Bernadette extends her busy farm schedule to a specialist teaching role at the Babakin Primary School for 2-3 days each week.

The family farm started in 1920 when grandfather Bill came from England with his two sons to settle in the Bruce Rock district. His son Brian expanded the Babakin holding to the area now farmed by third and fourth generations of the Robinson family.

Grant said last week that the sheep enterprise had averted a financial disaster when frost slammed a big section of crop in September last year.

“Not having to worry about feed for the 2016/17 season , and knowing that our returns on 1,800 lambs would be stable, fully justified any extra management and cost.

“The producer of the month winning line was the third draft of lambs to go to WAMMCO with weights on some of the bigger drafts at the top of the scale.”

“If there is a good season and lamb prices are attractive, we can capitalise on selling them with ideal timing for high market returns. With wool prices looking better, we now also have the option of carrying the lambs on and shearing them.”

Generally, the Robinson family commitment to sheep looks set to continue for the immediate future.

“Farmers exiting the sheep industry don’t hesitate to tell you how much easier their lives have become. But when it all comes together - as it did for us this year to offset a costly frost - having a sheep option can prove very valuable indeed.”