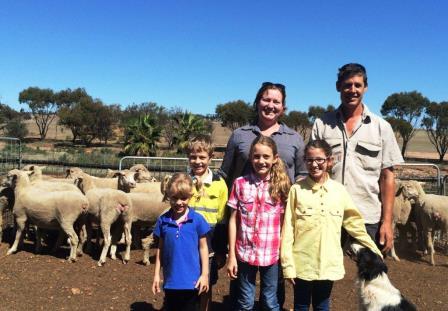 Three generations of infusing SAMM genetics with Merinos has assisted Quairading farmers Chad and Sacha Langsford to develop a profitable, minimum-care lamb enterprise that won WAMMCO’s Producer of the Month title for February 2016.

It was the couple’s first Producer of the Month win and was significant, because the large line of 411 lambs processed at Katanning on February 23, averaged 23.75 kg for an average of $114.06. Lambs at the heavier end of the consignment returned just over $155 per head.

“The winning lambs went straight off lupin stubbles and their condition was such that I considered entering some of them in the State Lamb competition,” Chad said last week.

He began using SAMM rams from Shirley Downs stud at Quairading about eight years ago. His father Peter had bred Merinos mainly for wool since the early 1970’s and the ewe flock represented a sound base for a move into prime lamb production.

The breeding flock of about 1,200 ewes is now classed as pure SAMM, and still based on rams from Shirley Downs - ‘because they have continued to move us ahead.’

Chad is expecting a lambing percentage in the 90’s from the current joining . He uses lick feeders to keep the ewe flock in top condition but does not feedlot his lambs , which are usually finished on stubbles on cropping land about 15 km from the home property.

2000 hectares of the 3000 hectare property are cropped each year with lambs dropped on pasture paddocks before being finished on a mix of stubbles.

“Our returns from lamb are not far behind those from cropping, particularly when you take rising machinery and input costs into consideration.

“I believe the lamb returns from WAMMCO provide a good incentive, particularly with the rebates now being paid to producers in most years.”

He said it was intriguing to read recently that China was now almost self sufficient in lamb, so soon after claims that it would become the major demand market for Australia.

“It is therefore even more important for WAMMCO to maintain and increase its focus on the prime markets of North America, Europe and the Middle East,” he said.

Chad said the family had traditionally been light stockers mainly to avoid pressure in tough seasons, and was now at the point of making further adjustments to suit lifestyle changes because of the educational needs of a young family.

Chad said Mark Fairclough of Westcoast York, had provided valued help in developing and maintaining the lamb enterprise over the past three years.