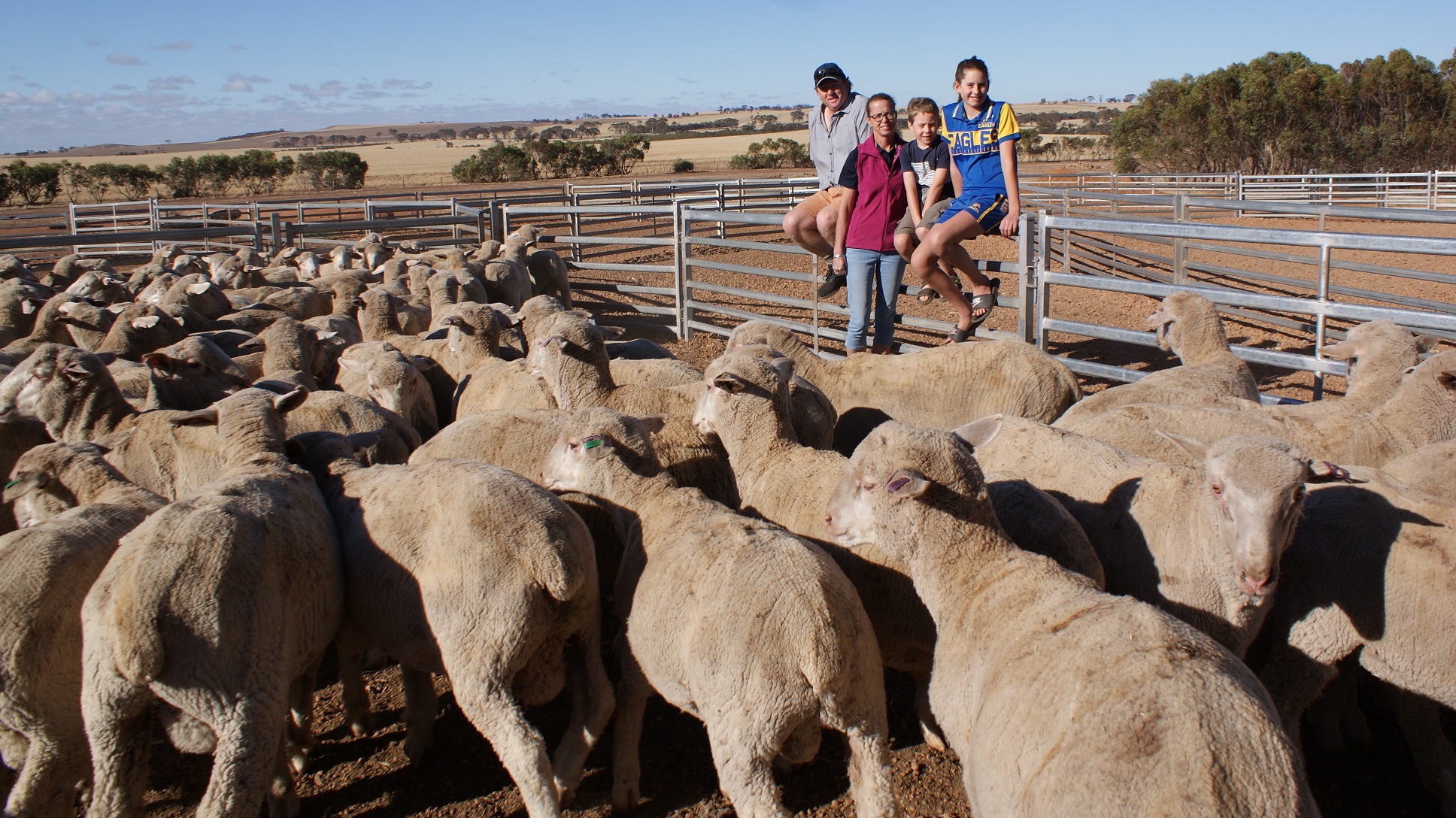 Grazing their ewes and lambs on crops of Spartacus barley with a complement of pellets and salt licks, and capitalizing on the higher profitability of their SAMMs, has proved to be a successful strategy for Dumbleyung producers Dale and Suzanne Cronin and Dale’s parents Terry and Lyn Cronin of Bunkin Farming Enterprises.

Dale Cronin said the past three years had seen further successful investment in SAMM genetics and the phasing out of a long - standing Merino component in the flock.

The move to grow barley for grazing and subsequent harvest, replaced a successful trial of ryecorn several years ago.

“Some may find it quite daunting to see sheep grazing a barley crop before it is harvested. But as long as you manage the grazing properly, you will increase your stocking rate and can reduce the severity of frost in early sown barley,” Dale said. “We have enjoyed great success over the past three seasons grazing early sown crops of Spartacus barley, trail feeding pellets and using salt licks, without affecting the crop yield.”

Bunkin was an early investor in imported SAMM genetics to WA via neighbouring stud Rockdale, purchasing one of the early rams to achieve size and other impressive gains.

The Cronin family were also regular winners and place-getters in WAMMCO State Lamb Carcase competitions, as well as Producer of the Month titles for August 2011 and March 2013
They now make surplus young rams available for private selection, whilst also making astute purchases when high-potential rams are offered, Two such purchases over the past few years have been a ram from Shirlee Downs (WA) that won the Australian Champion SAMM at the Bendigo Show in 2017 and a ram from Lawral Park (SA) that won the Bendigo title in 2019.
“The second ram weighed more than 150 kg whilst still showing his lamb’s teeth and was related to an exceptional ram we originally purchased from Rockdale,” Dale said.

He said running bigger mobs of ewes had improved ease of management and contributed to whole farm profitability. It also compensated for more frequent seasonal variations in lambing percentages.

Dale found some years ago that selection of SAMM rams with a slightly higher fat score can produce lambs that maintain better condition over the summer. He and Terry retain their interest in wool , finding that higher flock numbers allow them to accommodate the better wool sheep in the stud.

“However, increasingly there is more stability and profit on the meat side, with a tendency to produce hardier animals,” he said.

The December 2020 Producer award was Bunkin’s first under WAMMCO’s new ‘sweet spot’ judging criteria since their last win in 2015 under more objective, former ViaScan-based criteria. Dale has previously commented on rising taste and tenderness comments he has received from consumers and the opportunity for premiums.

The “sweet spot” judging system seems to be quite broad and you would think that some lamb weights, fat score and yield percentages would be more profitable to WAMMCO than all lambs from 18.1 to 28 kg , fat score 2-4. Maybe the new DEXA machine will help with this.

He believes there is also potential for WAMMCO to develop a distinctive consumer brand identity for the domestic and export markets to take greater advantage of its unique production environment and producer cooperative base.

Like many of WA’s lamb-producing families, the Cronins have a long association with their farming area. Their Irish builder forefather John Cronin took up farming land near Dumbleyung in 1878 and built one of the first farmhouses in the area.

Our pic shows Dale and wife Suzanne with son Bailey 7 and daughter Jasmine 11 with Bunkin SAMM ram lambs to be offered for private selection in the coming season.