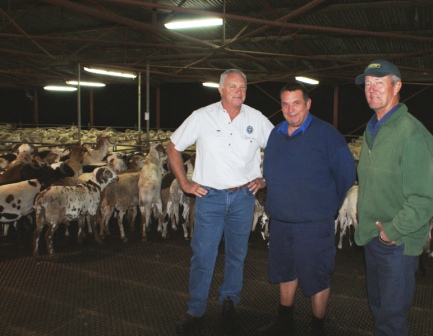 A new series of processing trials with fat tail sheep stranded by political disruption to Australia’s live sheep export markets, has changed the mood of a group of pastoralists and farmers in WA’s remote Southern rangelands from despair to guarded optimism.

WAMMCO’s Chairman, Dawson Bradford said the results of early trial consignments of about 3000 fat tail-type lambs and mutton from the pastoral and northern farming areas, had indicated significant potential for the cooperative to develop a large, new long term business.

"The WAMMCO board has pledged to commit the full resources of our global business to this initiative because we can see that it not only offers scope to restructure and rebuild the pastoral sheep industry on a processing, rather than live shipping base, but also a chance to extend WAMMCO’s capacity and product diversity.”

The cooperative’s CEO Coll MacRury said the trials had also focussed on the massive extent of the hybrid dog problem in the pastoral and marginal farming areas.

"Dogs are now not only causing an animal welfare disaster to sheep and other animals in many areas of WA, and pose the biggest threat to returning to viable sheep numbers in the pastoral and marginal farming regions.”

"WAMMCO will therefore be assisting producers wherever possible to bring both State and Federal pressure to bear on the increasing wild dog problem.”

Mr MacRury said trials since March with Damara and Damara or Dorper and Van Rooy cross ram lambs from Yalgoo, Shark Bay, Morawa and Bruce Rock, had confirmed that processing could offer a viable alternative to the live sheep export trade.

"They have shown that Damara and Damara cross ram lambs can produce a saleable carcase at rates of around $60 or more per head and our export department is already advanced in developing new global markets for this type of product.”

WAMMCO’s Supply Development Manager, Rob Davidson said even greater returns were possible for fat tail lambs that had received supplementary feed, or where Damaras had been crossed with the ‘meatier’ Dorper or Van Rooy genetics.

"We have attended meetings at both Yalgoo and Shark Bay where pastoralists have indicated there could be up to 40,000 fat tail sheep available each year for processing. If markets justify viable returns to the producers, we could see not only renewed confidence in pastoral sheep production, but a valuable new source of livestock for processing at Katanning.” Mr Davidson said.

Nuffield Australian Farming Scholar and Morawa producer Cameron Tubby, who farms "Bundawarra" at the edge of the Yalgoo pastoral region, said Damara-based fat tail sheep enterprises had been left with ‘nowhere to go,’ after the virtual collapse of the live sheep export industry.

"However processing may now offer the lifeline northern producers and pastoralists need and I believe that with a change of ‘culture’ in sheep genetics and management there will be scope to make sheep once again viable in the rangelands. In my own case, I am already aiming to replace Damaras with about 5,000 Van Rooy ewes, and to use Dorper and Van Rooy rams over them. My ultimate aim is to reduce my reliance on cropping, in favour of more livestock as the basis for farming, in line with global trends.”

Mr Tubby said he had been impressed with Van Rooy sheep grazing in the Kalahari Desert during his term in South Africa as a Nuffield scholar.

Quickly recognising the need to upgrade from Damaras, he had been able to source Van Rooy rams from a number of Australian breeders.

"I am thrilled that the pure Van Rooy and Damara/Dorper cross ram lambs performed so well in the WAMMCO trials with very basic supplementary feeding,” he said.

Meka station manager Bob Grinham travelled from Yalgoo to see 150 of his Damara ram lambs processed at WAMMCO, Katanning on May 17.

"The exercise was a real eye-opener for me and confirmed there is still a future for pastoral sheep if we are prepared to adjust. It also justified my decision to incur an extra $6 per head cost of feeding lupin meal to the ram lambs to increase their worth from $20-$30 per head to about $65.”

Bob said he had already begun fusing Dorper genetics into Meka’s flock of about 12,000 fat tail ewes and could see potential to supply WAMMCO with lambs between April and August.

Dogs remained a major problem for pastoralists and he recognised the need for more management to reduce uncontrolled matings and to improve genetic gains.

Primaries agent, Craig Walker said pastoralists in the southern rangelands were showing a positive response to the need to replace or hedge their traditional live sheep export markets.

Given that we now appear to have a viable start to developing a domestic processing industry, there is an enormous amount that pastoralists can do to maximise their returns.

"I believe there is capacity for them to stockpile bulk grain and feed when prices are low to feed their animals prior to slaughter. They can also reduce interbreeding and boost returns by offering their lambs as wethers rather than ram lambs and by moving to more Dorper, Van Rooy or similar genetics to produce more profitable, marketable lambs.”

WAMMCO expects the new fat tail based lamb business to develop over the next 18-24 months.

"There is work to be done at both the production and processing/marketing ends of the business, but it is generating enthusiasm, hope and a great deal of cooperation,” Rob Davidson said.Further Details: Rob Davidson