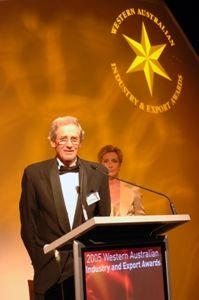 I recently had the privilege of attending the Australian Exporter of the Year Awards held in Broadbeach, Queensland.  WAMMCO had been nominated as a finalist in the Agribusiness section of the awards having previously won the Western Australian section of the same awards.  Although we were unsuccessful I believe we benefited tremendously from the exposure and experience.  The winner of this section was Cassella Wines from NSW, who went on to become the overall Australian Exporter of the year.  I believe the fact that we got as far as we did against some pretty strong competition is another indicator of how far your Co-operative has come.

Although next season may seem a long time away I remind members to give careful consideration to the marketing of their lambs.  We will again be offering members exclusive access to processing space provided they book by 31 August 2005.  Although our preferential contract does have a non-delivery fee this is not imposed when circumstances beyond the control of the producer prevent delivery.  This includes adverse seasonal conditions but does not extend to where a member simply seeks to obtain a better price elsewhere.

Our VIAscan unit is now operational at Katanning, although we're still ironing out a few technical problems.  It is hoped we can start providing feedback to producers selling over the scales soon.

Other improvements taking place at Katanning include the construction of a 1,500 pallet coldstore, which will remove the necessity of transferring frozen product toPerth for storage.  Commissioning is expected before 30 June 2005.  One of the problems the contractor has experienced is attracting skilled tradesmen – something that's also a real hassle for us at the meatworks.

We have just finished the construction of a dome shelter to cover approximately 1/3rd of our outside sheepyards.  This will help keep stock cool in summer and dry in winter when they're delivered.  It is intended to progressively cover the remaining yards, hopefully before winter.

Finally, applications for shares in the Co-operative are steadily increasing indicating that forward thinking producers who are not members are realising the benefits of membership, both in regard to access to processing space and future rebates.