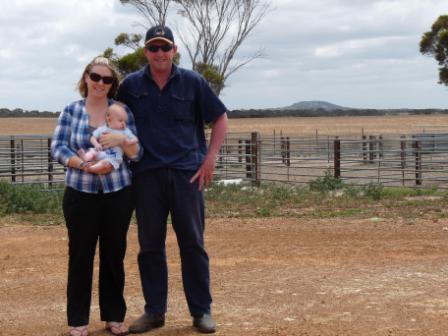 A chance booking at WAMMCO Katanning on January 21, was a bonus as well as a relief for Esperance SAMM breeders Brendon Tyrrell and his family - because their line of 378 lambs took out the Cooperative’s Producer of the Month title.

“We were growing anxious late in 2012 because there was still no booking for the lambs as they neared peak condition, when Barry Hutcheson of Primaries Esperance rang to advise there was space for us at Katanning in January,” Brendon said this week.

Brendon and his father Greg made the move from a pure Merino flock then based on local Ashgrove genetics, to SAMMS about ten years ago when they purchased five rams from a dispersal sale for Esperance Rural Properties at Cascades, later topping up with rams from the Quinlivan family’s “Quintarra” stud at Esperance.

Today their Swandale Investments property at Esperance is divided 2,600 ha to crop and 800 ha to sheep with 300-400 ewes mated as pure Merinos to Kolindale and local Derella Downs rams, and about 900 SAMM ewes to Rockdale SAMM rams from the Dumbleyung stud. Older ewes from the Merino flock are also mated to SAMMS for extra prime lambs.

“We believe our current enterprise mix is ideal for our environment , with both our sheep and cropping operations performing remarkably well despite another very tough year,” Brendon said.

“With just over 110 mm of rain between May and September, we were expecting wheat and barley yields of around one and a half tonnes to the ha, but they came in over 2 tonnes.

“We do not feedlot our lambs and they just got through on the stubbles, with the last small line of smaller ewe lambs delivered this week.”

Brendon said his current price for lamb of $3.50 /kg had to be compared with $5 /kg last year.

“I believe there is still optimism for the future of lamb, but the start-up costs remain high and many former local producers who went away from sheep ten years or so ago are now probably unlikely to re-enter the industry.

“Sheep have always been part of our culture for father Greg and myself and we were successful in taking second place two years ago in the class for 300 lambs and over at WAMMCO’s State Lamb Carcase competition.”

Brendon completed a TAFE course in boilermaking after completing school at Esperance, and found the skills learnt in welding and farm maintenance of great value when he joined his father on the farm in 1995.

He and wife Ros have a four month old son, Ethan.