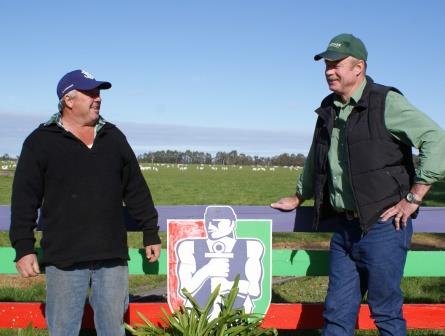 Mt Barker lamb producer Rod Drage has become a leader in his field by adapting his Suffolk/Merino crossbred lambs to graze local vineyards and bluegum plantations as well as his own lush, enduring pastures.

Rod and his local Landmark agent of long standing, Charlie Staite were last week celebrating his first WAMMCO Producer of the Month title, won by a line of 111 bare shorn lambs that weighed an average of 22.4 kg to return $124.55 per head, with individual lambs reaching $152.88.

The lambs were shorn in December/January and again in June. They were finished on pasture supplemented by paddock feeders.

“Higher rainfall, worms and grass seeds can make it more difficult for us to qualify than lamb producers to the east of Mt. Barker or further inland, and we are delighted to have won WAMMCO’s August 2015 award,” Rod said.

When Rod took over the small, 570 ha family holding 20 km west of Mt. Barker about 20 years ago, there was still a statutory monopoly on lamb and trading in Merino wethers was the best way to build an enterprise.

“At that stage we were trading mainly wethers and somehow, a line of about 50 pregnant ewes was included in a draft.

“Wayne Radford, who was with the Meat Marketing Corporation at the time, offered us such good money for the lambs from these ewes, we decided that buying and mating ewes was possibly a better way to go.” Rod said.

“As the wine and bluegum industries cranked up in this region, I began leasing their land to graze sheep. We were buying excellent Merino ewes at clearing sales for relatively little money and mating them to Suffolk rams.

“That gave us the options of selling to shippers, or to Fletcher at Albany, and later to WAMMCO at Katanning.

“Today we run about 4,000 Merino ewes, mating them to ‘The Dukes’ Suffolk rams from Ian Ranson. His stud property at the Porongorups is also renowned for its wines so we usually bring home a carton of Ian’s red to go with the lamb roasts,” Rod said.

Rod purchased another 400 ha of land some time ago and still leases a further 700 ha.

“We have no land to spare so it pays to buy in replacement ewes rather than breeding them.”

“We now work closely with WAMMCO’s Peter Krupa, delivering lambs through Charlie Staite at Landmark on a weight and grade basis. The system works well and the feedback on our lambs is excellent.”

“I now have more confidence in the lamb industry, particularly since WAMMCO’s success in the US market, and as a foundation, and subsequent purchaser of shares, I find their August/September rebates a major bonus.”

Rod and Charlie said whereas there had been no major shift back into sheep and lamb production in the area, there had been a significant investment in new sheep handling equipment, such as scales, yards and other labour saving devices.

Rod also had trouble coming to terms with the Eagles in the early days and was an ‘instant’ foundation member of the Dockers.

He has changed the name of his entry road to Pavlich, whilst Dockers emblems, flags and strangely coloured fenceposts confirm that visitors have ‘arrived.‘