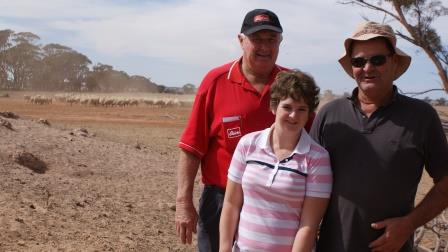 Wyalkatchem producer Steve Gamble was quite ‘chuffed’ to learn that his Dohne lambs had won WAMMCO’s Producer of the Month title for March, 2017.

At his instigation, the Gamble cousins, Steve and David had switched their sheep genetics from pure Merino to Dohne in 2005 because of a disappointing trendline for wool and brighter prospects for prime lamb.

“Once we adjusted to the prevalence of small lambs at lambing, and saw how rapidly the Dohnes matured and grew , we quickly realised that the change would pay off,” Steve said last week. “I believe they are more drought tolerant than Merinos, still grow a handly clip of wool and consistently deliver more than 100 percent lambs.”

“Our sheep management is probably better organised but also easier because of benefits like a lower risk of flystrike.”

The winning draft of lambs from Gamble & Co., consisted of 206 Dohne lambs delivered straight from lupin stubbles to be processed at Katanning on March 29. They averaged 22.78 kg to return $136.01 per head – with 99.5 percent of the consignment meeting WAMMCO’s processing/marketing criteria.

The company supplies up to 1,000 prime lambs per year, mainly to WAMMCO with the tail going to Muchea.

Better fertility has enabled Steve to contain the size of the commercial lamb breeding flock, and with higher recent wool prices, he is trialling contemporary Merino genetics from the Cardiff and Olinda studs of Quentin Davies and Don and Brad Eaton to see if wool yields can be improved.

Another decision to defer the annual lambing from April to the end of May has also proved beneficial, - particularly with the current copybook season, and the high survival and growth rates of multiple birth lambs.

“Apart from the remnants of some medic pastures and an annual crop of lupins for stubbles and to keep the silos full, the lambs have run entirely on natural pastures,” Steve said.

Grandfather Robert Gamble moved from Victoria to take up a small acreage at Wyalkatchem in 1903. The family name is one of about 300 listed on a memorial in the town, of farming pioneers in the district in the early 1900’s.

Russell Wood agrees with Steve that sheep numbers in their area have changed little over the past five years, but that there has been a significant improvement in management, genetics and marketing by established producers.

“Knowing that you will be paid well for good lambs is a good incentive, one that we are happy to capitalise on,” Steve said.