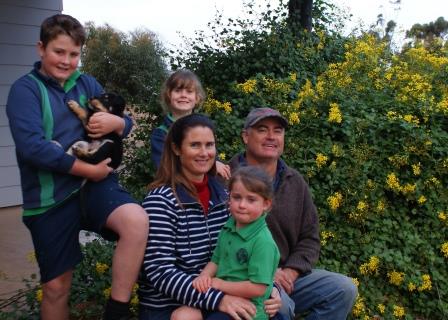 The Roberts’ family business, ‘Lortleaze Farms’ at Esperance was WAMMCO’s Producer of the Month for May 2018 with a line of 182, six month old lambs, processed at Katanning on May 29 to average 22.4 kg per head with 95.05 percent of the line in the premium category.

The lambs were finished on regenerated serradella (margarita) which established after 60mm of rain in February.

Simeon Roberts said the consignment represented one of the final despatches of Dorper/Kojak lambs bred by the Roberts family over the past decade. He said whereas Kojak/Dorpers exhibited fast growing lambs with excellent carcase traits, they had not been achieving high conception and lambing rates, - especially early in the season.

“The proportion of our Merino ewes has increased over the past three years with genetics from Cascade-based Westwood Merino Stud. They are a plain bodied sheep suited to both quality meat and wool production and we are looking to develop with them,” Simeon said.

Lortleaze Farms was the inaugural runner-up in the ‘Merino lamb’ section of WAMMCO’s Producer of the Year contest for 2016/17.

Simeon said significant improvements in sheep husbandry over the past few years had greatly assisted making decision-making easier and more rewarding for sheep producers in the current bouyant market conditions.

“In the past decade, we have invested considerably in new livestock technology and infrastructure, which has also lifted our management expertise and best practice.

“The adoption of summer sown or regenerated pastures is a major advance, enabling us to use summer rains to grow abundant legume fodder crops like vetches and serradella to compliment both our livestock and cropping enterprises.”

This major new investment had been welccomed not only by farmers in the Esperance region but in other areas of WA that may also benefit.

“The strong focus on pasture legumes and pasture performance is vital to our 80/20 percent cropping/pasture rotation.

“These pastures can achieve very high biomass very early and late in the season, allowing us to lamb a third of our ewes in March. That in turn takes more pressure off the winter lambing.”

Simeon said one 170 ha paddock seeded to ‘capello’ vetch after 60 mm of rain at Cascade, had carried 1880 ewes plus 1770 March drop lambs during April and May until weaning. The same paddock was currently carrying 400 lambing ewes.

With dry conditions since February the Roberts Family have ewe lamb replacements and early drop adult ewes (which now are dry) in confinement feedlots. They are being fed a maintenance ration including wheat straw, lupins and a mineral supplement until the season turns around.

At this stage all other ewes are lambing without supplement on summer established vetch, medic and serradella.
“Our last consignment of 3,200 Merino and crossbred lambs is being finished in the feedlot on a ration of grain with barley straw. We have sample weighed them in at 48kg and aim to finish them at up to 60kg before delivery to WAMMCO in July.”

“The intensity and standards of the WAMMCO operation are a real eye-opener and producers who have not yet done so, should make the effort to take a look,” he said.