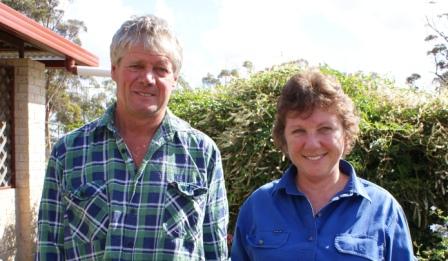 However a draft of 110 SAMM lambs delivered from the Naballing Estate feedlot on March 15, just after the deadline passed for competition entries, won Peter, Wendy and son Lee, their first WAMMCO Producer of the Month title.

“The lambs were the first out of the feedlot and were mostly fat score 2 (78.4%) after four weeks on a mix of oats, and lupins with some barley added,” Peter said.

Peter said the tight season with a ten percent drop in lambing had resulted in a higher retention of lambs this season and he expected a slightly smaller total turnoff of around 1500 lambs, mostly from the feedlot.

SAMM rams are now sourced from Phil and Chris Bairstow of Gulnare Prime SAMM Stud at Dumbleyung and the flock of 2,500 breeding ewes is 80 percent SAMM and rising.

Peter continues to see lamb production via feed lotting as a key to the viability of smaller family farms such as Naballing, and believes recent State initiatives to produce a million more lambs each year will depend not only on seasons and improving genetics and husbandry, but also on WAMMCO’s ability to generate adequate price incentives.

Son Lee, who has been working as a shearer, is now able to spend more time on Naballing. Lee and wife Cathi recently welcomed their third baby.

“We continue to reduce our reliance on cropping in favour of sheep production, and will be planting more sub-clover and Serradella- mix pasture this season,” Peter said.