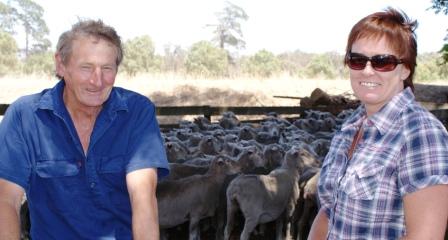 Prime lamb production could feature in a farming resurgence in the tree plantation areas of Frankland River and other areas, according to WAMMCO’s Producers of the Month for November 2011, Robin Higgins and his family of “Netley” Frankland River.

“Looming changes with the decline of the bluegum plantation industry and the attraction of sound lamb, wool and grain prices, have at last started to turn the tide back in favour of farming down here,” Robin said last week.

“The farmers and larger farming corporations that bucked the ‘tree trend’ a few years ago are now seeing strong rewards and there is increasing talk of big areas of plantation land in our area being sold back into farming.”

The Higgins family, - now in its fourth generation, - first moved to Frankland from Capel in the late 1800’s, developing land for sheep and cattle.

Robin, wife Janice, son Bradley and his wife Jody today farm about 1100 hectares of pasture including 200 ha of leasehold. They mate around 2500 ewes each year, - 1200 Merino ewes to Strathaddon rams, and another 1000 first cross ewes to rams from their own Texel stud, with a further 300 Merino ewes mated to Border Leicester rams.

Their winning November consignment consisted of 182 lambs dropped from first cross mothers in late May/early June and weighed on the property before delivery to WAMMCO with a 45 kg target liveweight.

Another 180 heavier lambs in the same mob were also processed at Katanning on November 16 and weighed an average of 25.37 kg to return $127.85 per head including an $8 skin. This group was an entry for the State Lamb Carcase competition.

Robin and Bradley are both foundation Members of WAMMCO and Robin was also an original member of the Q Lamb group in WA. He said he would like to see WAMMCO take up some of the Q Lamb initiatives on domestic lamb marketing.

They are happy with their mix of wool, lamb, Angus beef and cropping but have been steadily advancing the prime lamb enterprise.

“We moved to first cross ewes for our lamb production in 2000 with noticeable results and have been gaining steadily since,” Bradley said. “We depend on the scales and aim to deliver lambs to WAMMCO straight off their mothers.”

Robin said the area had gone from one of the driest years on record to one of the wettest in 2011/12 (over 900 mml). (A freak storm last Friday caused serious destruction and flooding on the property with lightning killing a number of lambs.)

The family is also happy with their Merino wool production claiming they ‘lucked in’ last year with excellent prices for both lamb and wool.

Their top line from a clip of 115 bales, sold through Landmark last year at $14.50 per kg. Strathaddon genetics are keeping their average wool quality below 20 microns as well as producing large frame, plain bodied ewes.

The Higgins family have watched in dismay as bluegum plantations have taken over their area, removing infrastructure and leaving schools and community amenities without enough people to keep them viable.

“But the tide is certainly turning, and we are hopeful that the continuing high returns now available from lamb, wool and grain, together with the unique quality of our soil and climate, now promise a real alternative to tree farming,” Robin said.