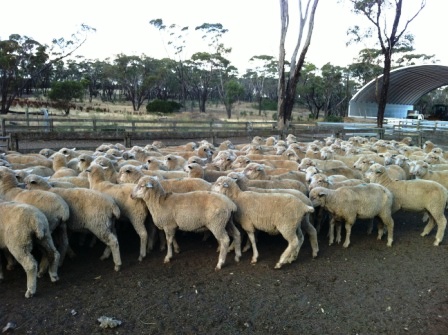 Strong European signals of an escalating demand for red meat and a shared passion for sheep farming convinced Jerramungup couple Alan and Sandy Forbes four years ago that they were on the right track with investments in their Royston SAMM and White Dorper stud and commercial ventures.

The couple returned to full-time farming at Jerramungup six years ago and were WAMMCO’s Producers of the Month for February 2012 with a line of 120, July drop SAMM lambs that averaged 22.62 kg to return $118.04 per head with individual animals paying up to $144.46 per head.

It was their first Producer of the Month win, and a highlight for them was the high percentage of 55.8 percent or 67 of their lambs qualifying as WAMMCO Select to return an extra $3.13 on each of the 120 lambs processed.

“WAMMCO Select has become a benchmark for both stud and commercial lamb breeders in WA, and to us it the measure of whether our breeding policies are headed in the right direction,” Alan said last week.

A visit to Europe in 2008, when WA lamb prices were still relatively low, enabled Alan and Sandy to witness first-hand the looming shortage of red meat, especially prime lamb, and encouraged them to return to full time sheep farming.

Sandy’s passion for livestock developed while growing up on the family farm at Gnowangerup followed by an Agribusiness Degree then many years as an Ag Adviser at Dept of Agriculture Jerramungup. Her interest went commercial when she joined Alan to take over the Forbes family farm at Jerramungup in 1994.

The Royston SAMM stud was registered in 2004 and the White Dorper stud followed in 2006 and now runs over 600 stud ewes for both breeds. Their fifth On-property sale was held last year in September and over 150 rams were sold between the two breeds, with clients ranging from Badgingarra, Manjimup, Esperance and the Eastern States.

The couple’s flock of 1500 commercial ewes is SAMM-based , consisting of first and second cross ewes with the first third cross ewes just beginning to appear. 2010’s drought was a serious set-back, forcing them to sell off a big portion of their White Dorper commercial ewe flock early last year.

“A good season this year has not only avoided a heavy feed bill, but has enabled us to fully capitalise on the breeding gains we have been making over the past few years,” Alan said.

The winning February consignment consisted of 7 month old SAMM lambs from first and second cross ewes. They were weaned in October and shorn at the same time cutting 1.5 kg of wool. They were weaned onto a good ryegrass/clover pasture then oats stubble, followed by finishing with hay and oats on a wheat stubble.

Higher wool prices are rewarding the cuts of 5kg per head of 20-21 micron wool from the SAMMS, with a recent 3A line returning 821 c/kg.

Sandy said Royston’s selection focus on Lambplan and key breeding values for dual purpose sheep, as well as good visual traits was beginning to show through in their commercial flock.

She said Royston enjoyed a successful lambing of 148 percent across both the stud and commercial flocks in 2010 under that year’s severe drought conditions, and then backed that up with a solid 120 percent lambs in 2011.

The couple said local interest in sheep was building slowly but the emphasis on cropping continued to be strong, even with further damage bills from recent summer rains.

They were at Wagin Woolorama last week, viewing the judging of the record line-up of SAMM and White Dorper entries. Sandy is President of the Prime SAMM Breeders Society of Australia (Inc) Western Division.