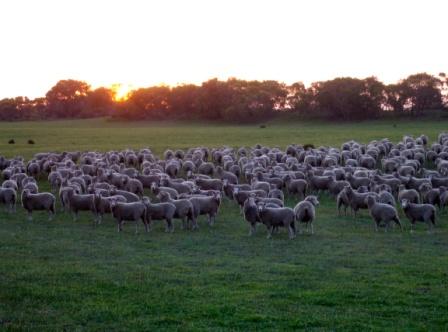 Bremer Bay lamb producers Wayne and Tara Pittard have broken through a SAMM stranglehold on WAMMCO’s Producer of the Month contest, to take the October 2012 title with a line of 101 Texel and White Suffolk lambs from Merino/Border Leicester ewes.

Processed at WAMMCO Katanning on October 9, the consignment averaged 23.55 kg and was valued at $3.68 per kg to return $86.29 per head including skin.

It was the first non-SAMM win since Kojonup breeder Tim Stevenson was Producer of the Month with a line of Poll Dorset and White Suffolk ewe lambs in December, 2011

“They were a great line of lambs and it was disappointing that the price was down from previous levels and that there is no longer a WAMMCO Select bonus, but the return was still a good one under the circumstances,” Wayne said last week.

The Pittard family moved from their Merino/cropping operations at Kulin to a smaller property at Bremer Bay in 2002 when they changed to an exclusive prime lamb enterprise.

The Pittards have always purchased the top rams at the Moora British Breeds Sale, Border Leicesters had been Types of sourced from Robert and Alex Keamy’s Anro stud at Moora, and Texel genetics from Robert and Maria Woods of Teraku stud at Bindi Bindi and White Suffolks from Julie & Malcolm Klante of Westwood Stud, (since sold) in Serpentine, all were chosen to form the new breeding base.

“We are now keeping the best of the half Texel and half White Suffolk ewes and mating them to Texels and White Suffolks.

“The second cross lambs are now on the ground and we are quite excited by their potential,” Wayne said.

“We have also enjoyed lambing percentages of up to 136 percent and have not seen a result below 100 percent since we started with crossbreds at Bremer.”

Wayne and Tara are currently involved in concrete supply & contracting and real estate businesses in the area and have reduced the size of their original property to about 1200 acres. They have been eradicating a barley grass problem and switching to clover/ryegrass pastures and to kiyu in the lighter sandy country.

They hope to devote more of their time on the lamb enterprise over the next few years. Their immediate challenge along with their local Landmark agent Neil Foreman, is to get lambs sold at a reasonable price and booked in for processing.

“Recent lamb drops are some of the best we have seen, but arranging accommodation for them, with WAMMCO booked out until February 2013, has proved difficult,” Wayne said.