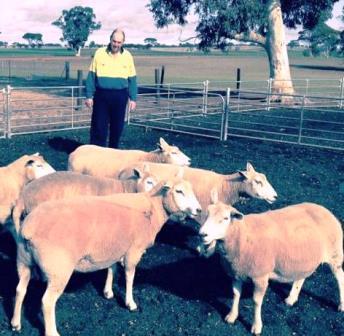 Dumbleyung Texel breeder Robert Temby has won WAMMCO’s June 2015 Producer of the Month title with a line of 205 Texel cross lambs that weighed an average of 22.14 kg to return $126.78 per head.

Robert accepted the award with mixed emotions as he and his wife Meryn Clune were preparing to leave the Dongolocking property north of Dumbleyung that was established by his grandfather Horace Temby in 1920 and later farmed by his father, Bill, and himself.

The couple recently sold part of the property and leased the balance for five years to satisfy the unremitting demands of a bank that took over his stock firm loan account a few years ago.

“We have leased the balance of the Dumbleyung property for five years and will be heading for greener pastures near Harvey, ” Robert said last week.

“We’ll keep a few Texels and take a breather for five years then see how we feel about a return to commercial farming,” he said.

Their older son Eamonn is an accountant practising in Perth while their 13 year-old son Peter is keen to stay on the land when he leaves Narrogin Senior High School.

Robert took an early interest in the Texel breed before he purchased his first nucleus of 14 ewes and a ram from the Australian Texel Corporation at Echuca, Victoria in 1996.

“I was rewarded with 21 lambs in the first mating and together with other breeders, we were soon getting good prices from Dardanup Butchers, Walsh’s and Herdsman Markets, where our breed was featured.”

He also maintained a sizeable flock of Merinos until recent years, in tandem with the prime lamb operation.

“Sheep always held a strong presence around Dumbleyung through until cropping took over in the 1990’s,” Robert said.

“It is disappointing to see all of those green shoots appearing in the stubbles after rains, with no sheep in the paddock to harvest them before they are burnt for the next crop.

“We always kept a good balance of sheep, and found the Texels were an ideal base for prime lamb production. They were never penalised for being too fat and their annual breeding cycle favoured the sale of lambs in February each year. We usually left the lambs on their mothers until December, trail feeding and running them on stubbles until they reached the required weights.”

He also established the Morronging Texel stud on the Dongolocking property, supplying up to 30 rams a year, mainly to locals until last year. Temby Texels also featured regularly in Royal Show carcase awards, Woolorama and other events..

Landmark Dumbleyung stockman Scott Jefferis has assisted with the marketing and management of the flock for the past 10yrs years and a good percentage of the Texels have been directed to WAMMCO, qualifying for the pool bonus.

Robert was a keen supporter of WAMMCO Select and believes that ideally, members of the cooperative should be able to deliver enough lambs to make processing self-sufficient without having to compete in the saleyards.

Of his winning June consignment, 140 of the 204 lambs delivered would have satisfied the previous WAMMCO Select premium grid , with individual lambs returning $159.60 per lamb including a $3.92 skin value.