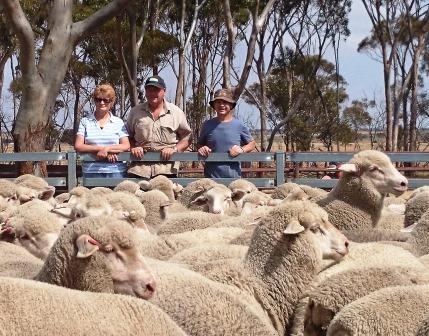 A long tradition of perfecting merino ewes for wool and lamb production and the more recent development of their highly successful Uralla SAMM stud at Pingaring, continues to help the Jensen family to stay in WAMMCO’s winners’ circle.

The first draft of 419 SAMM/merino crossbreds from Uralla for the season weighed in at WAMMCO Katanning on September 10 at 24.55 kg and paid $5.13 per kg including skin, to return $126.06 per head and win the family’s fourth Producer of the Month title since 2005.

An excellent season saw the draft shipped straight from the paddock with good weights and impressive fat scores, with individual lambs returning up to $147 per head.

Each year, the Jensens continue to mate about 1700 Merino ewes to Merino rams and a further 2,000 merino ewes to their own SAMM rams.
"We have continued to use merino ewes because of their size and other attributes developed with the help of Nepowie poll genetics over more than 50 years," Peter said last week.

"This year, WAMMCO also paid us $86 per head for 320 seven-year-old merino ewes at the end of their breeding life, and after we had shorn eight month’s wool from them, and a further 313 merino wether lambs, usually kept for the best market, also went to Katanning to return an average of $96."

Uralla has also been a consistent winner at State Lamb Carcase Competitions, taking the title for overall winner in 2012/13 as well as the prize for best entry of crossbreds based on merino mothers

"We continue to work closely with WAMMCO, making early bookings each year through Rob Davidson and the WAMMCO team, and keeping to them as closely as possible."

Peter said the family was pleased to receive WAMMCO’s recent rebate and was continually upgrading its shareholding in the cooperative. The dividend again came at the right time of the year.

"We are now beginning to see real benefits from the cooperative and are confident that WAMMCO will continue to develop as an essential, independent ‘underwriter’ for the State’s lamb industry. I believe producers will come to depend more and more on integral structures like WAMMCO as global markets change and more and more traditional rural businesses fall to foreign ownership and marketing control.

"It is therefore also pleasing to producers to see highly competent candidates with vision standing for vacancies on the WAMMCO board."

The family continues to expand their Uralla ‘territory’ at Pingaring, increasing their holding to 10,000 hectares during the past 12 months.

The enterprise comprises cattle and cropping as well as wool, prime lambs and the Uralla SAMM stud with responsibilities evenly spread between Peter, Robert, Rachael and Craig with moral and administrative support from Isla.

The Jensens maintain a 60/40 ratio of cropping to livestock with all wheat, barley, canola and lupins performing as well as the livestock under an excellent season this year. A targeted, one-year cropping/clover rotation keeps paddocks clean and productive for each succeeding year.

Demand for their Uralla SAMMS has continued to grow with a sell-out of 80 stud rams at this year’s annual property sale for an average of $930 per head and good sales of flock rams to local buyers and from as far away as Esperance.

The annual lambing program has been impressive with rates of up to 115 percent now common in the merino as well as SAMM flocks.