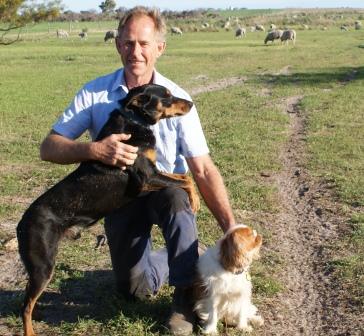 There must have been times in early 2018, when Simon Williams believed the normally reliable coastal rainfall on his property at Jerdacattup, was going to fail him.

“We had virtually no rain between February and June this year - our driest period on record - but I was still able to supply some good lambs to WAMMCO,” Simon said.

In fact, the 725 old season’s lambs processed for him at Katanning on August 6, averaged 20.35 kg to return $133.59 per head including skin, to win WAMMCO’s Producer of the Month title for August 2018. 94.3 percent of the draft was within the premium grade. Another 712 crossbred lambs from the property sold a week later for similar result.

These lambs contributed to a total delivery to WAMMCO so far this season of nearly 8,000 “free range” lambs from Simon’s “Shambani” property , confirming his previous recognition as WAMMCO’s third place Producer of the Year for 2016/17 in the large crossbred category.

The increase in numbers will come via purchases of store lambs from breeders from Williams south to Mt.Barker in October/November and they will be on green perennial pasture until sale between May and August.

“I am competing in that buying period for store lambs with WA chilled airfreight exporters, but I believe there is more all-round benefit in retaining and feeding these lambs to assist with later processing shortfalls of heavier lambs.”

He has found purchasing store lambs more profitable – and manageable - than breeding them, although he continues to sell about 1,500 lambs per year sired by SAMMS from Kelso/Merino, or White Suffolk, Border Leicester/Merino cross.

Simon is also looking forward to the introduction of electronic identification tags as a major boost for farmers to monitor physical production of their sheep flock, and improve traceability from paddock to plate.

“I am aiming to produce ‘free range’ lambs on green feed the year round while building soil fertility via the perennials,” he summarised.

“Rainfall is returning to normal this year after a disastrous start to the year and should achieve close to the 550 mm annual level in future.

Producing prime lamb has been a specialty of Simon and his father Derek since well before the evolution of WAMMCO in 1999, with Derek advocating a professional industry grading system on the hook for WA producers from the early 1970’s.

It was the promise of higher production from more reliable rainfall that moved Simon and his wife Karla to sell a 2,000ha property in the 400 mm rainfall belt at East Mt. Madden in 2003/04, for the prospect of averaging 545 mm on a similar size farm at Jerdacattup, only 15 km from the south coast.

Simon believes State lamb producers have WAMMCO to thank for moving WA’s lamb industry from quantity to a quality base, and he said he was optimistic that the premiums now being paid on WA lamb, would continue for some years.

“Global sheep and lamb numbers have continued to decline, particularly in New Zealand while the demand for quality lamb appears to keep growing, promising reasonmable security for the forseeable future.”

Simon’s wife Karla was born in Australia to Norwegian parents, and travels to Katanning each week to work as a Clinical Nurse specialist witth WA Country Health Service. Their oldest daughters Heidi 25 and Zoe 24 are based in Kununurra and Perth whilst the youngest Kristin is at boarding school in Perth.