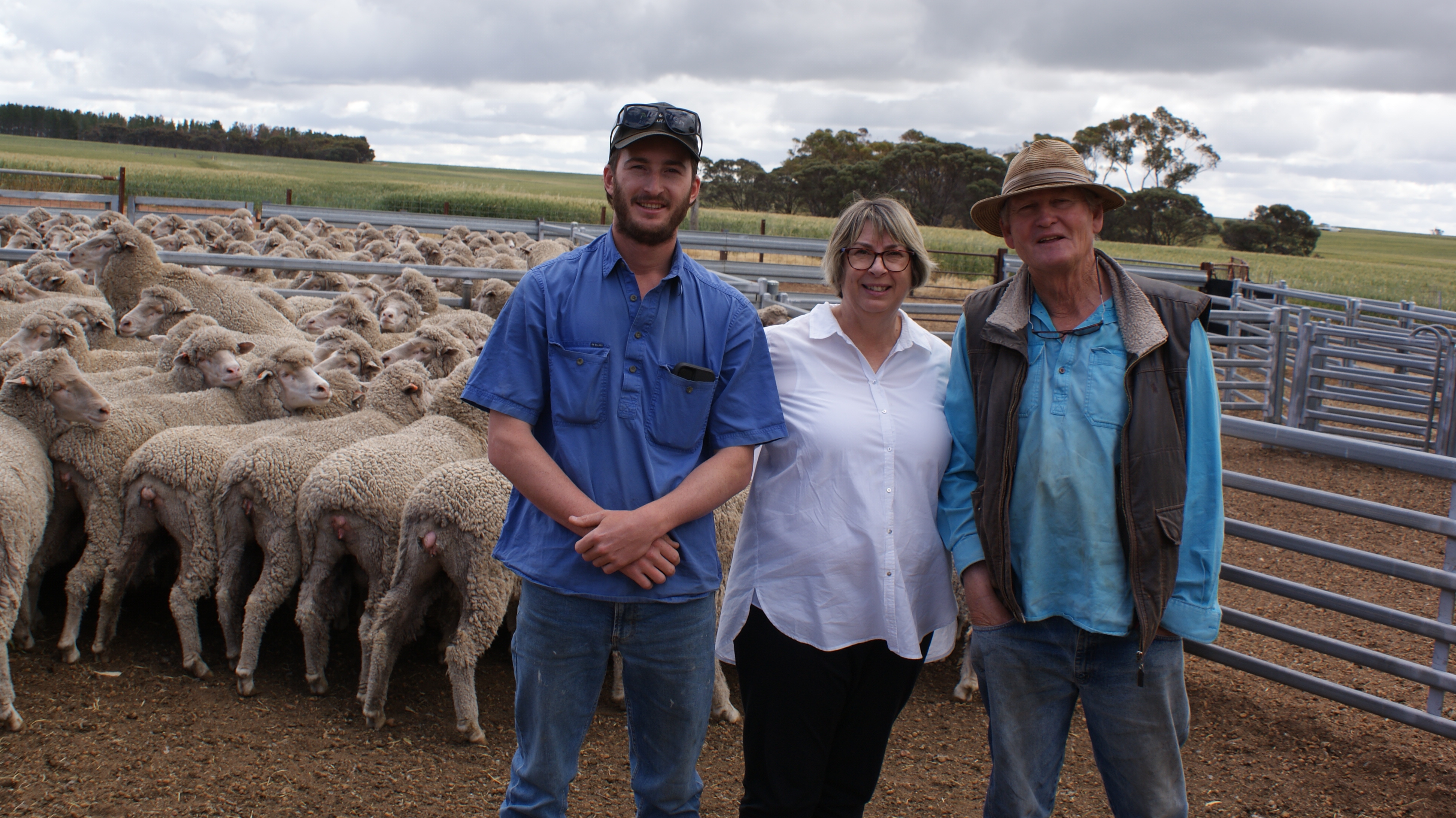 Gnowangerup producers Owen, William and Fiona Gaze regard their maximum score as WAMMCO’s Producers of the Month for September 2020, as confirmation that the sheep industry can continue to meet constant, increasing change.

A consignment of 148 of their composite lambs scored the maximum 100 point ‘sweet spot’ to claim the WAMMCO September title. The lambs were processed at Katanning on September 29 and averaged 21.5 kg to return $134.32 per head.

The couple believe a fundamental change to dual purpose, easy care sheepbreeding in their area has enabled local producers to capitalise on the strong global market for sheepmeats. In turn they are surviving not only worsening annual seasonal cycles and a disappointing wool market, but are attracting younger people into a management role.

“It is pleasing to see many of our young people returning to the land to take on the farming challenge, adding the energy and expertise so vital for us to stay ahead,” they said.

The Gaze family has been synonymous with the Gnowangerup/Borden community since the early 1900’s. Fiona – from respected Mukinbudin farming stock – came to Gnowangerup as a teacher and married Owen in 1986. Apart from a busy role on the farm, she has been Principal of the District High School for the past eight years, and is currently Gnowangerup Shire President.

24 year-old son William completed a degree in Agribusiness at Curtin University and gained wider experience before returning to the property 12 months ago.

Starting with around 1,000 Merino ewes from the original Owendale stud, he and Fiona, with the support of his father Des, imported Prolific rams from Heggaton’s Kojonup stud to develop a flock of 500 FI composite ewes.

The Gaze family also runs a separate flock of 1,000 Merino ewes, using rams from the nearby “Mianelup” Merino stud of Ross, Kathryn and Elliot Richardson for their large frames and prime wool quality.

“Apart from marking averages of around 120 percent lambs in the composite flock, we were impressed by how they thrived in this area and how easy care they were.

He said declining rainfall, with the corresponding threat of increased wind erosion was making it harder to run sheep.

“Lick feeders have been a game-changer and we have been feedlotting our sheep over the past two years with a choice of competitive, locally manufactured pellets to complement our own feed stocks.

“But we have been carting water from 20-30 km because our winter rains have been too light to fill the dams. So far this season we have received just over 220 mm, with our heaviest fall of 26 mm on August 5. We will get through, but would give anything for a good ‘old-fashioned’ winter downpour of 40 mm or so to put the season right.”

Owen said sheepmen were becoming increasingly reliant on WAMMCO for the stable lamb and mutton prices that offered a vital option to grain production.

“Our composite lambs go to Katanning in September, depending on the season and the wethers follow after shearing in February.”

The ‘Owendale’ shearing this year involved about 2,500 sheep and lambs, with wool quality averaging 20.5 microns for the Merino and 22.5 for the crossbred clips.

“We are typical of many families in this area who have made the transition from stud breeding, to become high-performance, commercial sheepmen with farming operations that have also achieved impressive rates of succession.