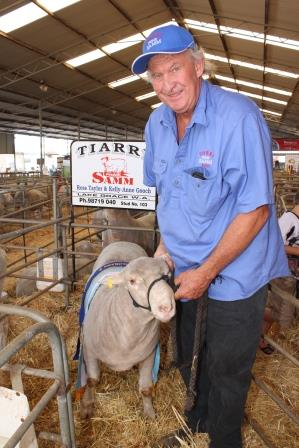 Winning their fourth WAMMCO Producer of the Month title – for February 2014 - along with some key Woolorama ribbons last week, on top of a good season, has set a positive 2014 pattern for Ross and Pauline Taylor, and daughter Kelly-Anne Gooch of Tiarri Prime SAMMs at Lake Grace.

“However they were some of about 1,400 lambs that came straight off lupin stubble paddocks into a firming market, and that is a bonus at this time of the year. Other drafts of heavier lambs since have averaged $130.35 and $127.50.”

The Taylor family supply about 2,500 lambs to WAMMCO each year, and at least 50 percent of these are now pure SAMM.

Ross said they missed out on the WAMMCO bonus last year and had changed from selling weight no grade last year, back to the normal daily schedule.

“I am optimistic about the global prospects for lamb and can see value in WAMMCO’s use of rebates to maximise producer returns.”

Tiarri Prime Samm’s mainly supplies SAMM rams to producers in the area, The Breed is very adaptable to seasonal and market variables, With High percentage lean meat yield, high feed conversions, and good priced Merino Wool to cover shearing expenses. The Taylor family continue to commit about 50 percent of their enterprise to cropping with the balance to SAMMS for meat and wool.

At one point during a run of tough seasons, Ross said the lamb enterprise was probably more viable than cropping. However the drop in returns for lamb and the lower input costs involved with cropping because of the good season, had restored the balance.

Tiarri has nominated lambs again for the 2013/14 WAMMCO State lamb carcase competition, and whereas the family continues to be ‘up there’ in the rankings they have yet to repeat their 2012 success when in a very difficult season, they entered two drafts of lambs and won the two major awards.

At this year’s Wagin Woolorama, Tiarri won Reserve champion ram as well as the title for best ram in the Objectively Measured class.

Ross said the good season had left Tiarri in good shape, but with low dam levels because winter rains had been consistent, but not good for run-off.

“As long as there is adequate feed, I am always happy to cart water if necessary,” he said.