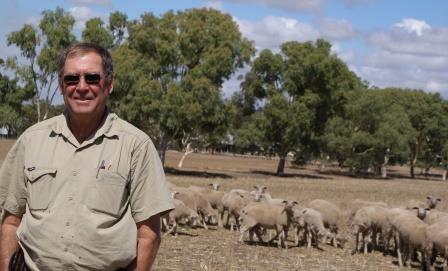 Don, wife Chris son Darren and daughter Jemma and their partners, of Danubin Farm won WAMMCO’s Producer of the Month title for February 2017 after an exceptional season that boosted the average weight of their 300-lamb line to 23 kg per head, with 99 percent meeting the cooperative’s ‘sweet spot’ judging criteria.

The entry was one of many lines processed at WAMMCO Katanning that lifted the plant’s overall weight per head average for February 2017 to 1.5 kg more than the previous February.

It was also one of five drafts from producers in the Wongan/Mingenew/Wubin triangle to win the title since WAMMCO reinstated the producer of the month on a new ‘sweet spot’ judging criteria in July last year.

Don Sadler and Elders agent Jeff Brennan maintained a policy of selling weight-no-grade to WAMMCO to achieve a return of $124.58 including skin for the 300 lamb draft.

“Using weight-no-grade may have cost us the WAMMCO annual rebate to producers, but it has also probably improved our returns in seasons when we would have been penalised for not meeting stricter quality specifications,” Don said.

“We will continue to assess our options, especially if rebates continue, and now that WAMMCO is placing more emphasis on overall performance, rather than on specific lambs.”

The Sadler family have been prominent sheep breeders since they moved from Swan Hill in Victoria to Goomalling in 1922, and then north to Wongan Hills in 1925.

Don’s father Charlie took up Danubin Farm in 1946, and the family has increased the holding to 7,000 hectares of Tammar/York Gum country over the past decade. A family transition at the end of the year will see Darren and wife Georgie take over the home property and Jemma and husband Shea Donnegan operating a recently acquired property at Goomalling.

Today’s Danubin sheep flock consists of 1800 ewes, 800 mated to Merino rams from David Kelly of Kondut and 1,000 to White Suffolk rams from Rex Glass at Calingiri. The lamb enterprise also benefits from a percentage of SAMM, first cross ewes in the “mix”.

The flock runs on about 1,200 hectares of the property, including problem paddocks that are difficult to crop, areas of saltbush and the many alleys of mallee originally planted for oil, but now assisting salt management on the property.

Lambs are dropped late, from mid-June to capitalise on available natural feed and usually better prices from January onwards – a policy that reaped excellent rewards in 2016/17.

“We had green feed through to October, with good summer falls in December and a further 100mm in January keeping the paddocks green,” Don said.

The season was not so kind to the cropping operation, with widespread frost slashing yields from what was shaping as a record harvest. A further setback came with the reluctance of sheep to graze the frosted areas.

Don said he admired the work of Dawson Bradford and his directors and staff for getting WAMMCO off the ground and for ensuring that it remained competitive. He relied on local Elders agent Jeff Brennan not only for his production and marketing skills, but also for his ability to minimise high freight costs to Katanning by organising trucking from the Midlands.

White Suffolks had proved ideal for the lamb operation, with notable benefits in consistent lambings above 100 percent, including more twins and higher lamb survival rates.