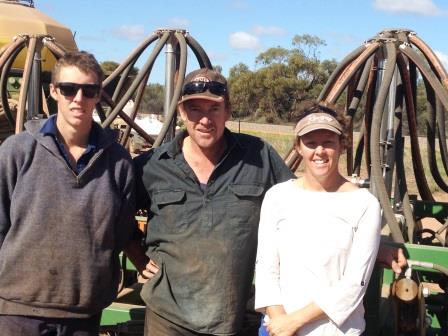 Winning their second WAMMCO Producer of the Month title since February 2011 has capped an excellent opening to the 2014 season for Peter and Kate Mills of "Ikewa", Mingenew.

"The late April rains and follow-up after a long dry summer, have set the scene for one of the best seasons I have seen in 30 years of farming," Peter said this week.

He said the industry had also passed a low point in the market last year when a tight start to the season and excess numbers made it difficult to get bookings with WAMMCO, forcing him to have many lambs processed elsewhere and to miss out on a trading rebate from the cooperative.

"This year has been better all round and we are happy to be selling weight and grade again in a much brighter market and seasonal environment."

He said about 80 percent of his flock of 2000 ewes were now SAMM following a decision in 2007 to upgrade their prime lamb production. About half the ewe flock were now pure SAMM, based on genetics from neighbour Rob Campbell’s ‘Enokurra’ SAMM stud.

"We continue to maintain a small nucleus of Merinos, based on rams from Warwick Teakle at Northampton, and also used some of these rams over a group of SAMM ewes at the last mating, but meat returns continue to outdistance a wool market that continues to disappoint."

"WAMMCO’s schedule was at about $4 per kg for our first lambs this year and we are happy to see prices changing for the better. Hopefully, there may be another trading rebate this year to boost average returns to producers.

"Obviously it needs only a very small percentage of Chinese people to shift to red meat, for the entire industry to benefit."

He was keen to see an upgraded WAMMCO Select system considered as a means of providing extra quality incentives for producers, particularly if taste and tenderness criteria were included.

Peter and Kate’s eldest son Jack left school to join them on the farm this year, while daughter Maggie and twin sons James and Henry are still studying.

Kate continues to be an integral member of the lamb production team, being responsible for weighing lambs and other key roles.

Wheatgrowing represents about 80 percent of the Ikewa farm enterprise, and there are still very few neighbours or other district farmers running sheep.

"Mingenew was once identified as one of WA’s best wheat and sheep areas. Today the sheep rarely get a mention."