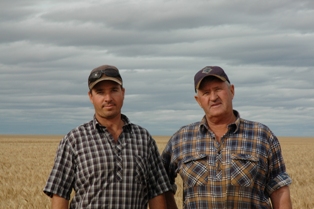 The prospects of a good cash flow from lamb without too much stress led Hyden farmers Clint and Kevin Couper to mate an extra 800 Merino ewes to Poll Dorset rams last year – and to win WAMMCO’s Producer of the Month title for October.

Clint Couper said the Hyden property missed out on April rains but experienced good pasture growth for most of the season, enabling him and father Kevin to turn off most of their crossbred lambs before an October deluge set back pasture growth.

Merino and crossbreeding accounts for about 35 percent of the farm enterprise on the 4,500 hectares of “Warrawidgee” and leased land, with parents Kevin and Barbara and Clint and Sandie all playing an integral role in the business.
“We have always aimed for large framed sheep, using Kolindale merino genetics for many years, and for the past few years, our poll dorset rams have been coming from Deejays at York,” Clint said this week.

An extra 800 merino ewes were added last year to boost the crossbreeding program to 1600 ewes while the merino mating was reduced to 1,000.  This year turned out to be a good season for the Coupers with all lambs going straight off the pasture by the end of October.

The family has used WAMMCO forward contracts in the past but uncertain seasonal conditions have caused them to opt for a daily price over the scales for the past few years.  “The 2002 drought was a tough one for us and we remember placing many sheep on agistment and having to sell lambs at the Katanning saleyards at low values,” Clint said.

“We enjoy a good working relationship with WAMMCO at Katanning and look forward to getting our kill sheets to see how our lambs perform,” he said.