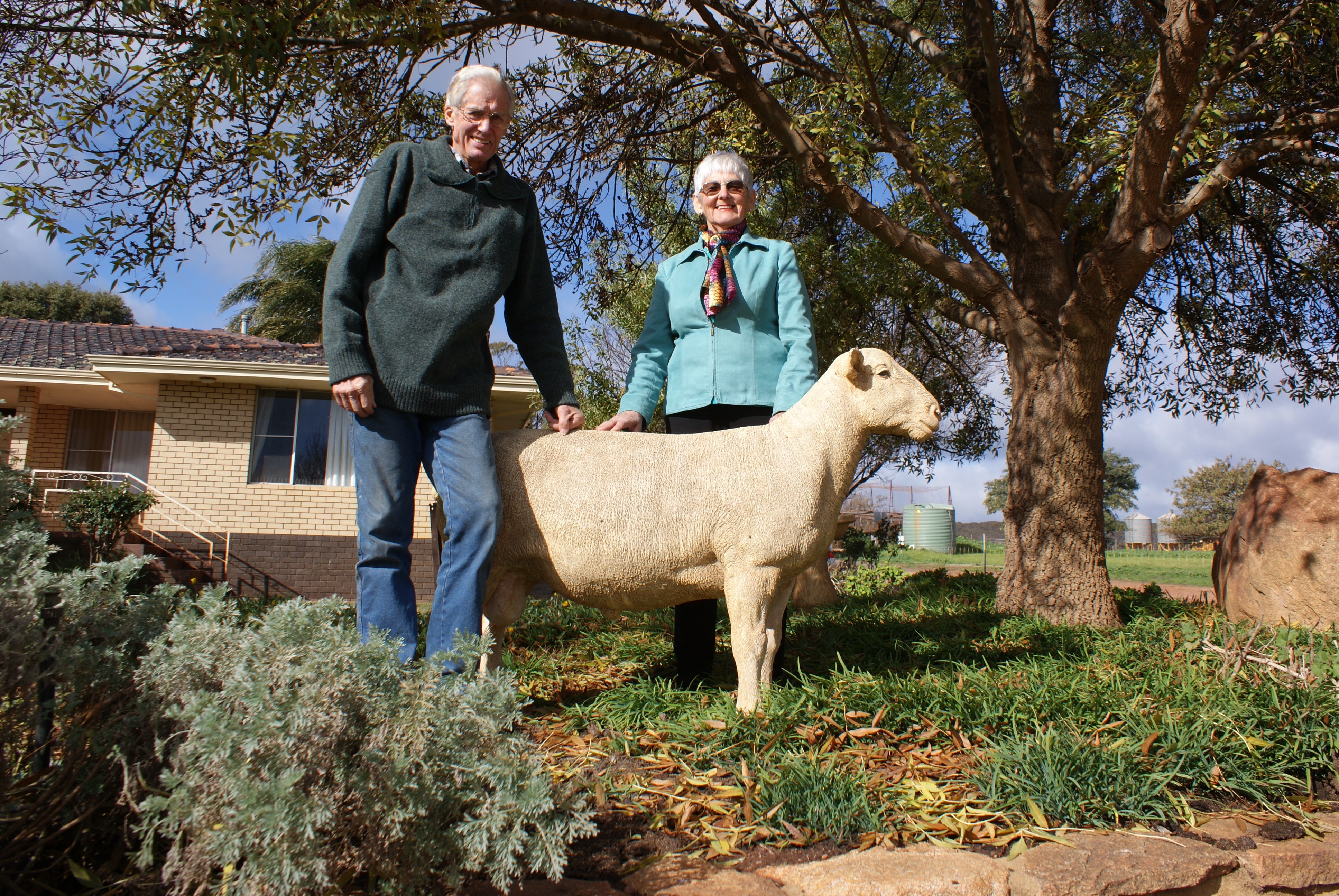 For a farmer who started farming almost from scratch to build one of WA’s most successful farm enterprises, Dawson Bradford is still contributing to some of the most highly strategic advances yet seen in the evolution of Australian prime lamb.

As a farmer who did not hesitate to step up to lead WAMMCO through the most critical phases of its relatively short history, Dawson Bradford’s contribution to the survival and hard-earned success of WA’s producer cooperative, has also been legendary.

These achievements were amongst many listed in the name of the Prime Lamb breeder from WA as a recipient of an OAM in the 2021 Queens Birthday Honours list.

After over 40 years spent improving and promoting Poll Dorset’s through the national and State associations and via a close involvement with LambPlan, Dawson Bradford shifted his stud breeding direction in 2005, initially to a mix of Poll Dorset x White Dorper and Poll Dorset x Wiltshire Horn genetics, later settling on a White Dorper - Poll Dorset cross as the future genetics for his Sheep Stud.

He had been laid up in recovery from major cancer surgery in 2002, and took this opportunity to reflect on many issues, including how he might make his sheep better performers.

He was determined to take wool out of the production equation, using a wool shedding gene, and a self-taught, hands-on appreciation of genetics based on his many years of Poll Dorset breeding. The launch of the new UltraWhite stud in 2005 quickly aroused State and national breeder interest, not only because of a non-shearing benefit, but also because of the extra growth and impressive muscle development, and the much-improved fertility focus of this new sheep breed. The breeding process also captured the hardiness and the easy lambing of the Dorper breed as an UltraWhite trait.

Genetically shortening the lamb tails resulting in not having to remove them was the next genetic achievement to excite not only farmer, but consumer interest.

“I distinctly remember the reaction of a group of major overseas Super Mart executives on a visit to WA as they realised the enormous animal welfare perception of removing the need to tail our lambs,” he said.

Dawson had reasoned that by significantly increasing the fertility of his ewes to lamb marking levels of around 140 percent, then mating them for up to three lambings per year would more than justify the move away from any dependence on wool. He is now on track to lift lamb production per ewe to the region of 170 - 180 percent per lambing.

Several aspects of a unique eating quality in the UltraWhite breed are also under scrutiny, including an ability to produce desirable types of omega 3 fatty acid now recognized as having exciting health benefits.

“Our farm staff were the first to comment on the taste and extra appeal of meat from UltraWhite lambs. The discovery of this eating quality is now flowing through to select groups of consumers via a growing number of butchers and retailers supplied by some of our ram clients,” Dawson said.

Compounding national and international interest in his UltraWhites surfaced late in 2020 - about 12 months earlier than he had expected. The Hillcroft Farms 41st annual stud sale of UltraWhites early in October 2020 saw all record prices for the annual sale smashed.

Farm Weekly reporter Lynnette Carew-Reid captured the mood of this sale in her introduction:

“UltraWhite rams sold for an $18,000 high, but it was ewe prices that left onlookers gasping when 70 stud ewe hoggets averaged $3,127 under the hammer.

This sale set a new WA stud ewe record prices of $5,900 over all breeds.

It has also justified decisions by a growing list of stud and commercial lamb breeders to become early investors in the new breed, taking progeny to many areas of Australia and New Zealand.

As ‘hands on’ producers with an increasing stake in lamb production, the Bradford family had watched with increasing concern during the 1980’s and 90’s as WA’s lamb marketing sector was stalling due to outdated constraints placed on the industry through the Compulsory Acquisition Scheme of 1972.

Later admitting his lack of caution in accepting an invitation from then WA Agriculture Minister Monty House in 1999, Dawson Bradford jumped on board with a selected team of directors to develop a new producer cooperative using former assets of the original WA Lamb Marketing Corporation, which had been closed by the Court-Cowan State Government, to purchase the assets of the Chinese-owned, Metro Meat International at Katanning and Wooroloo.

WAMMCO lost more than $7 million in its first formal year of operation - leaving the new cooperative with no government or shareholder funds, a nervous banker, and the lack of an effective survival plan.

Realising that to do nothing would not only mean the loss of a unique opportunity for WA producers to own and operate their own cooperative, but also that as directors, he and others may find themselves in legal strife or at least highly embarrassed due to the poor financial performance of the Cooperative in its first year of operation, Dawson agreed to step up as chairman, with fellow director Max Cameron as acting CEO to endeavour to salvage the business.

Former Metro Meat State Manager, Des Griffiths later was appointed as CEO and the process of selling off assets such as the Linley Valley processing plant and the WA Lamb Building in Wellington Street, and of redirecting the marketing and production cultures and goals of the Cooperative were of high priority.

A simple set of objectives for WAMMCO - strongly supported from the outset by the chairman and his directors, was to:

•    Increase competition for lambs
•    Achieve a producer control and vertically integrated      lamb procurement, processing, and marketing cooperative.
•    Set standards in production so to be known as a producer of high-quality products of lamb and mutton.

An ambition to pay rebates, when and wherever possible, to producer members based on annual profit also became central to WAMMCO’s cooperative philosophy from 2000.

As Chairman, Dawson made several visits to New Zealand to strike up working links with that country’s biggest lamb cooperatives, leading to his early determination to join WAMMCO to membership of the Australian Lamb Cooperative to access the lucrative North American market for premium Australian lamb which is still bringing huge financial benefits to the WA lamb industry.

Producer shareholding in WAMMCO improved in line with the improving prices being achieved by the Cooperative and its success in upgrading key sections of the Katanning processing plant to improve its profit potential.

Weight and grade lamb sales, price incentives based on measurement data, and for out of season lamb production, were closely matched to a steadily improving international reputation, strong overseas demand for WAMMCO product, and grower support at home.

The Chairman recalls an historic 71 percent rise in the average price per head paid for WA lamb from $37.99 to $64.82 and a $4.5 million profit turnaround in 2002 as an historic achievement for WAMMCO.

Strong demand for prime product has since kept average lamb returns well above $100 per head and profit levels per hectare highly competitive with grain, along with a lift in the average weight of lamb carcases from 17-18 kg per head in 1999 to 20-21 kg since 2007.

The arrival of New Zealander Coll MacRury in 2009 to take over from WAMMCO CEO Des Griffiths quickly focused on the purchase of the Southern Meats processing plant in Goulburn, a renewed push via WAMMCO’s membership of the Australian Lamb Cooperative to benefit from the prized North American market, and serious commitment to upgrade chiller/freezer capacity/quality and processing technology at Katanning.

As Chairman, Dawson was an originator and strong advocate for the first LambEx conference in Perth. He was recognised at the more recent 2018 Lambex assembly for his contribution to the prime lamb industry via the launch of the WAMMCO History, “Off The Hook”.

Not only did his 2021 OAM recognise the management and lamb breeding abilities of Dawson Bradford, but it also found his family’s extensive farming interests near Popanyinning enjoying their best season for opening rains, productivity, innovation and profit.

Another prominent business in the Bradford family ‘stable’ is a 1400-sow intensive piggery that counts as one of the biggest and best performing privately owned piggeries in Australia.

Son Dawson Bradford Jr returned to Hillcroft Farms in 1992 having completed a 3-year farm business management course at Marcus Oldham College for which he was the dux for his year. By the time of Dawson’s Snr health crisis in 2002, he was able to step up and take over the management role to enable his father to recover from major cancer surgery. Since then, he has taken responsibility for the impressive piggery venture along with cropping and general farming. Dawson Jr has also taken leadership roles within State and National pork industry structures.

Dawson’s other OAM credits include his long contribution to local government via the
Cuballing Shire, his credit for establishing Lambex in 2010, Founding Chair of Meat Elite Australia in 1988, his 25 years on the Australian Poll Dorset Association Board as a Director including a term as chairman, his role with the UWA Institute of Agriculture Advisory Committee since 2015, his induction into the RAS Hall of Fame in 2014, his Honorary Doctorate of Science from Murdoch University in 2010, and his life membership and long running support of the Cuballing Cricket Club.