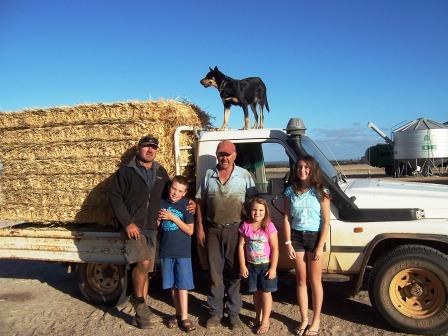 A breeding ‘partnership’ in SAMMs started with their Jerramungup neighbour Cullam SAMM Stud some 10 years ago, has assisted Graham and Wayne Barrett of “Glendale” to move from Merinos to develop a flock of 5,000 SAMM ewes that won for them WAMMCO’s Producer of the Month title for December.

It was their first Producer of the Month win, but the quality of their lambs was established two years ago when Glendale won the State Lamb competition section for consignments of 300 lambs and above.

The winning consignment of 106 lambs from Glendale was processed at Katanning on December 17and averaged 23.29 kg to return $80.21 per head.

Nearly half of the consignment would have qualified as WAMMCO Select carcases.

Graham said last week the disappointing aspect of lower lamb market prices was that the tight margins allowed no leeway for property and flock upgrades.

“The quality of this year’s lambs was the same as last year, but our returns were roughly halved, leaving virtually no scope for investment in improvements,” he said.

“The other major concern was the news when conditions were worsening in October, that there was no killing space at WAMMCO until January, and this is an area that will also require more attention by both WAMMCO and their producer members.”

Graham Barrett took up Glendale in 1965 at the age of 17, moving from the family farm at Perenjori after his father paid a deposit on the Jerramungup WSLS property. He ran a Barloo/Boonoke Merino flock until ‘these SAMMS came along’ via neighbours, the Cullams.

“Since moving to SAMMS we have averaged 110 percent annual lambings producing stable weight gains for a turnoff of 4,000 – 4,500 lambs, with a wool clip of around 150 bales adding some security.

“We have been amazed at the ability of the SAMMS to hold condition without running to fat, even in tough seasons.”

The family decided on both an early mating of 3000 SAMM ewes followed by a late mating of a 2000 SAMM ewe flock this year after an annual contract for fattening Awassi fat tails collapsed.

They are also testing Suffolk and White Suffolk rams over the SAMM ewes to measure the effect of hybrid vigour.

Two feedlots, each with a capacity of 300 lambs are used to finish lambs for market.

“Lambs go into the feedlots between 38 and 42 kg onto a diet of nuts, barley and hay and are taking between 3-4 weeks to finish,” Graham said.

The Barrett’s 5,000 hectare property straddles the Bremer River near Jerramungup and is a reliable grain producer.

“The sheep enterprise is centred on land that is a bit rough for cropping and we have been trying new clovers and seradella to lift production. However tough dry seasons have proved a set back,” Graham said.

“Although we remain generally optimistic about the future of lamb, we are disappointed with MLA promotion of lamb and believe fresh ideas are needed.

“Something is wrong when producers receive $3.50/kg for a lamb that takes a whole year to prepare for market, when supermarket customers are still paying $15 - $25/kg.”