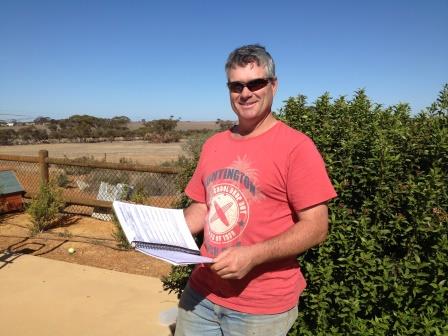 Kulin producer Simon Noble believes a lack of ‘emotional attachment’ to his sheep guarantees his flexibility to cope in tough seasons, as well as an ability to profit from ewe buying and selling opportunities.

Simon and wife Janine were WAMMCO’s Producers of the the Month for April, with a line of 112 Poll Dorset/White Suffolk/Merino cross lambs from imported Merino mothers. The lambs weighed an average of 21.16 kg to return $133.98 per head including skin, with 98.2 percent of the lambs qualifying in the 'sweet spot'.

“We have done well buying instead of breeding our ewes, and last year sold off most of our older ewes, replacing them with younger Merino ewes and ewe lambs.

“We will look at ewes in lamb and prefer to purchase full lines of ewes, even older animals, from reputable breeders rather than smaller lines, automatically rejecting any ewes that have not produced a lamb.” Home bred Poll Dorset rams and White Suffolks from Ken Graham’s small stud at Hyden, are used for mating early each season.

Simon said wool had returned to be a valuable component of his sheep enterprise with crossbred lambs producing 20 micron wool at around 900 cents per kilogram and wool from the Merino ewe flock selling at 1150 – 1160 cents per kg.

He cites a shortage of competent shearers and renewed uncertainty in the live sheep trade as negatives for sheep producers in an otherwise boyuant global market for processed lamb and sheepmeats.

The former Awassi fat tail breeders have returned to an all-Merino ewe flock of between 1800 and 2000. Marketing of the annual lamb crop is carried out by West Coast Livestock Kulin agent Barry Gangell, with WAMMCO as the main recipient.

Simon and brother Jarron split the original family property in 2010. Like their father Gerald and his brother Rex suffered many years before, Simon and Jarron experienced a massive drought in their first year as individual owners.

Simon and Janine currently crop around 2,200 hectares of their own property, running their livestock on the balance and on stubbles leased from a neighbour. They have two children, Tasmin (12) and Isobel (9).

The major storm that hit the area in February, delivered a welcome 40 mm of rain, but also destroyed their large central shed and a major pergola on the north side of their near-new homestead. With the dry seeding of wheat, barley and lupin paddocks almost complete last week, the need for worthwhile opening rains was at top priority.

Kukerin producers Col and Ronnie Joyce were placed second in the April 2018 Producer of the Month contest with a line of 456 lambs that averaged 21.15 kg to return $136.16 per head, with 97.6 percent of their lambs meeting WAMMCO’s “Sweet Spot’ criteria.

Former POM winner, Wally Mills of "Glenwall", Aldersyde came in third with 96.8 percent of a line of 190 lambs in the premium grade. These lambs weighed an average of 21.7 kg and returned $135.17 per head.

Former South African couple Ben and Nicola Slabbert made their debut as WAMMCO contributors on April 27, with a line of 350 SAMM lambs processed at Katanning. They weighed 23.22 kg to return $147.59 including skin.

The Slabberts came to WA about ten years ago and began working for farmers in the Lake Varley/Lake Camm areas. They purchased the local crop spraying business about six years ago and Ben later expressed an interest in running sheep to one of his farmer clients. The offer of a considerable area of stubble – offset by the spraying contract, saw him bring in local agents Barry and Lincoln Gangell to find the stock for him.

“They recommended a mixed line of about 600 SAMMs and we went from there,” Ben said.