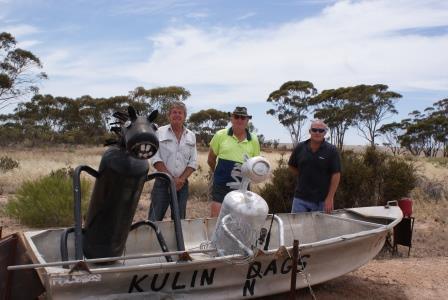 Seeking to diversify from wool and cropping to include meat sheep, the Meikles purchased their first SAMM rams from Warren Garlick about ten years ago, splitting their 1000 ewe flock of Karingal blood Merino ewes.

The 500 initial crossbreds have developed to become a ‘virtually pure’ SAMM flock and have assisted the Meikles to win their first WAMMCO Producer of the Month title for November, 2015.

Their winning line of 166 SAMM crossbreds was processed at Katanning on November 9 and averaged 23.9 kg to return an average of $112.09 including skins , with heavier lambs reaching around $130 per head.

David said high labour costs continued to act as a disincentive to lamb production in the area and people were still diverting to total cropping.

“However many family units with commercial flocks are also expanding to take advantage of the good returns from lamb, and this seems to be keeping the numbers constant. ”

The Meikles said Dorpers have been popular around Kulin because of their extra lambs, but interest had been switching to the new Hillcroft Ultra Whites.

Stephen said cropping now accounted for up to 80 percent of the enterprise on their 2,000 ha property “The Gullly” together with some leasehold land near Kulin.

“The SAMMS run on stubble with some hand-feeding of lupins and oats and we have enjoyed three good seasons - after seven bad ones.”

He has also been reseeding a pasture base with sub clovers and medics and he cuts about 100 bales of hay to top up the sheep rations.

Local Westcoast stock agent of 35 years, Barry Gangell coordinates the sale of the family’s annual SAMM lamb complement to WAMMCO as part of an ‘truckload a week’ delivery program from the area that usually begins in October.

“It has worked well for us because we can usually achieve our target of $100 per head for the lambs, and we rarely have trouble with bookings at Katanning,” Stephen said.

Grandfather Peter Meikle was allocated “The Gully” when he returned from Gallipoli and David Meikle took over the property from his father in 1984, after managing an adjoining property for landowner W.T. Matthews. He and wife Patricia still live on the property.

Stephen returned to the farm from Narrogin Agricultural College in 1996. He and wife Rebecca have two children, Nya (4) and Ella (6) .