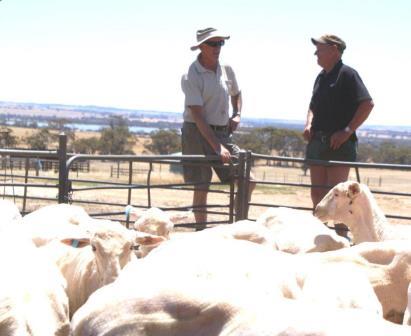 Aldersyde lamb producers, Wally and Glennis Mills, have weathered a tough season and increasing, costly attacks on their lambs by marauding Wedge tailed eagles – to win WAMMCO's Producer of the Month title for October 2015.

It was Wally's first title win since October 2005, but confirmed that his lambs have been consistently amongst the State's best in terms of price and productivity.

The 2015 turn-off of 2000 lambs and good numbers of mutton, has again all been sold to WAMMCO, with weekly drafts of 240 lambs at minimum 50 kg live weight, scoring well over $5 per kg dressed, on average.

"Add WAMMCO's handy trading bonus to those figures and we do not have much cause to complain about the Co-operative," he said.

"Increasingly I see WAMMCO as one of our most underrated assets, as an alternative to corporatisation in the meat industry, exhibiting diversity and success in the world"s best markets for lamb. This includes a careful perspective on the potential of new markets in China."

Wally's genetic mix of Merino and Merino/SAMM cross ewes and Poll Dorset rams, continues to involve about 2,200 ewes each year and is centred on the family's "Lakeside" property, acquired in 1965, soon after he and Glennis were married in 1963.

Wally is one of four brothers and his father Hartley, a passionate sheepman, used the "trick" of using South Suffolk rams over their maiden ewes to produce a smaller lamb for easier birth, whilst using Dorset Horn rams over the more mature Border Leicester/Merino cross ewes. Today's Poll Dorset rams do not create birthing problems, from broad shoulders, as the Dorset Horns did in the past.

Today the ewe flock is Merino/SAMM, all mated to Lakeside Poll Dorset rams.

In 1960 Wally was able to purchase a Valma Poll Dorset ram, from Guy Smith at Merredin, beginning the process of converting from "horns" to "polls". Then, in 1969, purchased 35 ewes from Valma's "Sale of a Lifetime" in Tasmania, to increase the flock size.

Lakeside continues to use Lambplan to stay abreast of genetic gains, with Steven Eales, of "Elspeth" Poll Dorset stud at Popanyinning, managing all of the "Lakeside" stud ewes.  Wally said, the lack of rain, after a poor opening, caused the clover germination to fail and led him to leave about 300 ha out of the cropping program.

The only good rains for the season did not arrive until August, but apart from boosting capeweed production - to feed the lambs - did little for the cropping prospects.

'Plague' numbers of Wedge tailed eagles, since they were declared a protected species in W.A., are a mounting problem.

He paid tribute to WAMMCO Chairman, Dawson Bradford, for guiding the Co-operative from early survival, against incredible odds, to today's success.

"I believe all lamb producers owe Dawson an enormous vote of thanks for his dedication and direction over the past 15 years," Wally said.