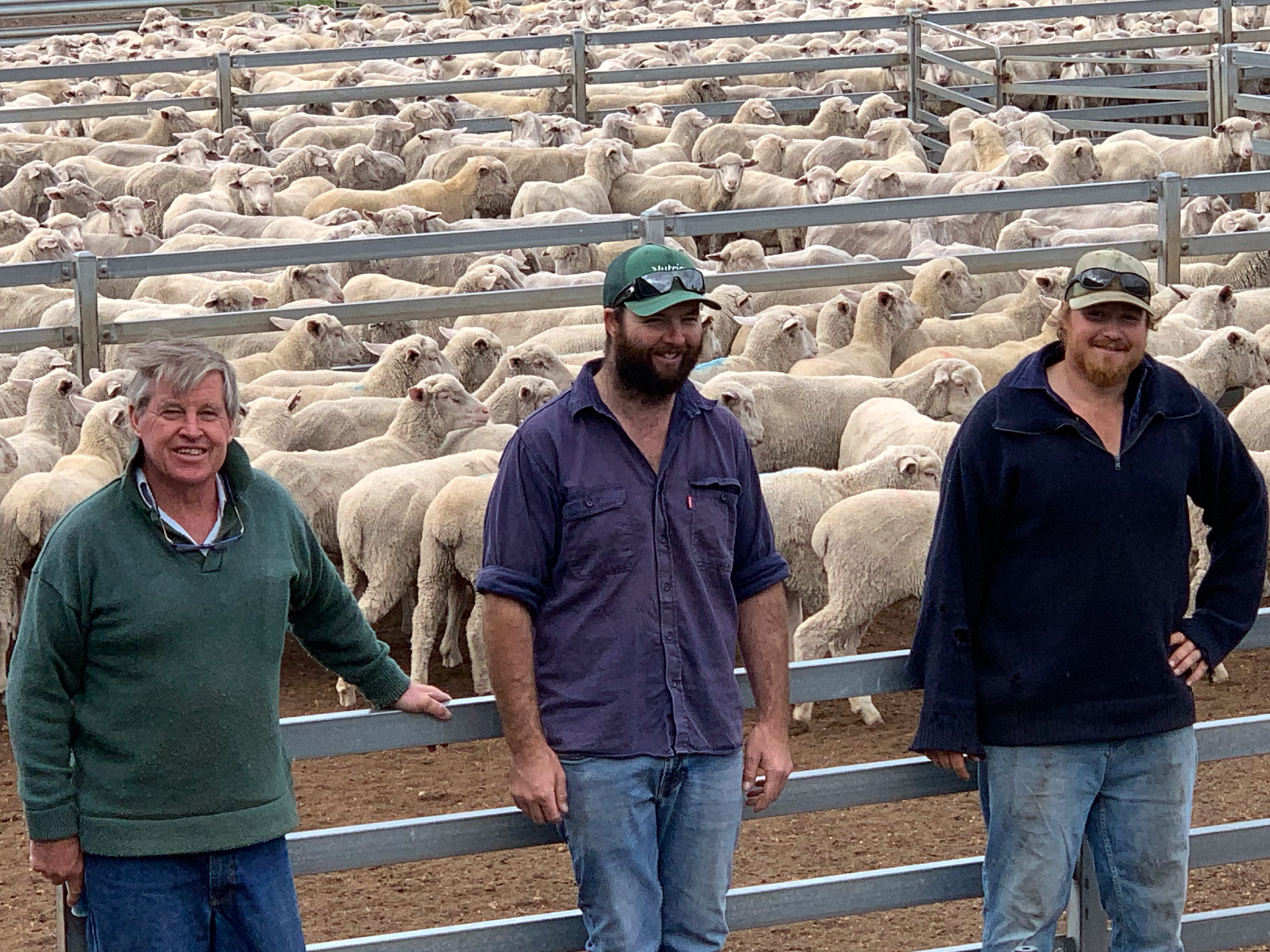 Also impressive was the fact that the winning entry was the last in a series of January consignments to WAMMCO that totalled 752 lambs with an average weight of 23.54 kg and a net average per head of $163.84. The total delivery recorded an overall score of 95.74 percent for the month.

The Reynalds family’s January results reflect the solid, rising scale of their Winton Park lamb enterprise progressing from a long-standing commitment to investment in the best genetics, management and technology and strong support for the local sheep processing industry.

Michael is also quick to point out that his family’s strong growth has been assisted by key staff members, Tambellup local Martin Deely who joined him 10 years ago and former Queensland butcher Michael Allman who joined four years ago. 18-year-old Cunderdin Ag graduate Tameka Baker is due to join the team shortly.

Michael Reynalds was a younger face of WA’s sheep industry when he drove to a WA Farmers’ meeting at Kojonup to plead the case for de-regulating the State’s lamb industry in the mid 1990’s. He believes WA’s strong, globally competitive lamb industry based on viable prices, has since continued to confirm the value of a free market-based system to producers.

The same commitment to competition led to a leadership role in the formation and development of “Q Lamb” in 1990, billed at the time as a quality game changer for the WA Lamb industry. Q Lamb also served as a beacon for the later WAMMCO emphasis on quality, not quantity, and year round supply, distributing weight and grade-based lamb premiums to producers.

Both Michael and wife Liz also share a passion for woolgrowing that resulted in the foundation of the Tambellup Wool Shed, selling woollen products, which now operates in Williams as “The Woolshed.”

More than half of Winton Park’s large Merino ewe breeding flock is mated to Merino rams bred on the property under Merino Select classification over the past 20 years. This side of the enterprise has resulted in an attractive, 18 micron wool clip from ewes that also have a bodyweight that is ten percent higher than a decade ago, and a reliable lambing percentage of 110 percent.

He remains positive despite the volatile state of the wool industry, and its recent declines in value and outlook, but is determined to maintain the highest quality standards.

“By way of contrast meat values for lamb and mutton remain outstanding with the bonus of a major processor as our partner on our doorstep, and a group of local sheepbreeders setting world class standards of genetic advancement.”

The Winton Park crossbreeding progam uses White Suffolk rams over maiden ewes, to reduce difficult births and Poll Dorsets over the remainder. Terminal sires of both breeds have been sourced over many years from Craig and Liz Heggaton’s Breeders’ Best breeding centre at Kojonup.

Sheep and lamb production accounts for 50 percent of the Winton Park enterprise and effectively utilizes considerable areas of steep granite country with areas of well-fertilised clover pasture. A major cropping operation is also closely integrated with the sheep and lamb business.

Equal thirds of the large annual lamb production are despatched from pastures in Spring and from lupin stubbles in summer to WAMMCO, with final sales into the local market.

Reduced hand feeding is a prime ambition of the crop/livestock strategy with post harvest heaps of canola and lupin chaff also assisting the pre-mating flushing of ewes, and fattening lambs (lupin chaff). In some years there has been no requirement for hand feeding.

Michael is also a strong advocate of 100 day, long-acting, pre-lambing drench capsules, having shown they justify their $3.60 per ewe and application cost with increases in the health and weight of the sheep and lambs.

Declining rainfall patterns in the Great Southern have resulted in the trial of a desalinated water system for Winton Park, using underground sources of water on the property. “We are high in salt, iron and silicone, and are depending on reverse osmosis for a potable water supply” he said.

Family optimism for the sheep industry led to the recent purchase of another farm – at a cost that was ten times higher than one of their previous purchases.

Liz and Michael Reynalds have a son Andrew who is a civil engineer, and a daughter Emma, who is personal assistant to one of WA’s corporate leaders.