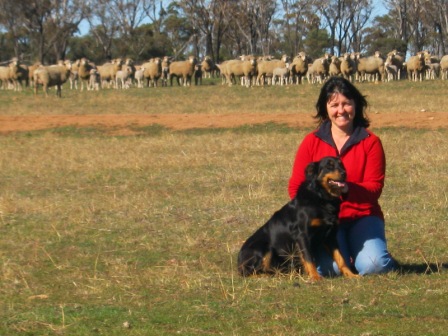 May has been something of a rally point - after a tough year - for Jerramungup producers Sandy and Alan Forbes of the Royston Prime SAMM and White Dorper studs.

"Indications by Coll MacRury and Damien Giumelli that international lamb markets are recovering, that there is currently less NZ competition, and that WAMMCO and its producer members are well positioned for the future, were very welcome," Sandy said.

A tight season last year forced them to cut their ewe numbers from 1500 to 1200 but there will be a similar number of Prime SAMM and White Dorper rams to be offered at this year’s on-property sale on September 17.

"We can now regain some enthusiasm and some confidence in the lamb business," she said.

113 carcases, or just under 77 percent of the line would have qualified for WAMMCO Select.

Sandy said it was pleasing that their percentage of lambs qualifying for WAMMCO Select had increased from 55.8 percent for their last winning entry in February 2012, to 76.9 percent.

"We are hoping that WAMMCO can restore the WAMMCO Select system, because it is the measure of our progress and our reward for breeding and delivering the best possible lambs. It is also a good indication of our ram selection using LAMBPLAN as a tool to achieve better growth and muscle as well as wool and fertility traits

"For the same reason, we would like to see that WAMMCO continues with the State Carcase competition because of the unique incentives and encouragement it offer producers."

Alan and Sandy won their first Producer of the Month title in February, 2012.

The couple have welcomed WAMMCO’s initiative with fat tail ram lambs from the pastoral areas and see this as a good potential development within the industry. They have already had talks about supplying White Dorper genetics to assist pastoralists.

Alan said the use of lick feeders was an important part of their sheep flock management.

"Last year when we received 160 mm of rain for the growing season, mostly in sparse, light falls, the sheep were relying heavily on lick feeders and hay. The remarkable thing was that we were still able to achieve 128 percent lambing and part of this can be attributed to the lick feeder helping to prevent mismothering. Twins and single bearing ewes are also managed separately," Alan said.

"This year we had handy thunderstorms in March and April, with follow up rains in late May. The lick feeders have been getting relatively little attention and the lambing is again looking good," he said.

The bonus this year was that the last half of the lambs went straight to Katanning off pastures, leaving some stored feed left in reserve.

Alan and Sandy established their Royston Prime SAMM stud in 2004, and their White Dorper stud in 2006. They also run a Milne Feeds depot, an Advantage Feeders, and Ravensdown Agency on their property north west of Jerramungup.

Sandy is in her third year as president of the Prime SAMM breeders’ association of Australia (Inc) Western Division.