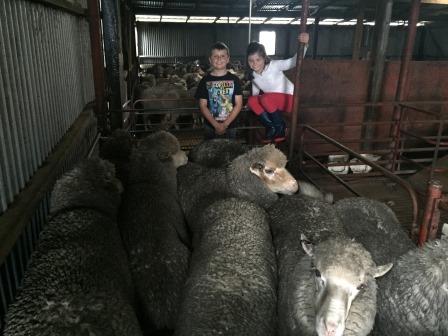 Manypeaks stockman Kim Dewar had started changing his small lamb breeding enterprise over to a new genetic base of Afrino rams and Multi Purpose Merinos, when a mixed line of lambs from his original flock won WAMMCO’s Producer of the Month title for December 2015.

The mixed line of 279 lambs from White Suffolk/Border Leicester and White Suffolk/SAMM /Merino crosses from his 530 ha ‘Cooralooka’ property, was processed at Katanning on December 9.

The lambs averaged 22.43 kg to return $116.57 per head including skins, with top animals worth just over $148 per head. They had the advantage of a brilliant start to the 15/16 season and were on grass until delivery to Katanning, despite a tight finish.

Seven-year-old Border Leicester mothers of some of the lambs in the consignment made up the load to Katanning and returned $72 per head.

Kim said he would like to be able to offer his Angus cattle, as well as his prime lambs to WAMMCO for processing.

“My freight bill is costed on 400 km to the South West or to Esperance, compared with about 200 km to Katanning, and I would also like to be able to sell my cattle and to have them marketed by WAMMCO,” he said this week.

“I believe the Katanning plant originally had provision for a beef floor and it would be good to see a cooperative marketing structure for beef in WA.

“The lamb marketing system works well for me and I believe, pays me what my stock are worth.

“I enjoy watching my lambs processed at WAMMCO because I like to compare them with others and to keep up to date with what the market is demanding.”

Kim said he originally ran Merinos and cattle on the property until some years ago, when an outbreak of footrot forced him to destock the sheep for two years, before returning to crossbred production.

He regards his mix of lambs and about 200 black cattle breeders as ideal for the property.

This year, he is complementing the White Suffolk/SAMM /Border Leicester genetic base using SAMM/White Suffolk rams from Max White’s Brimfield stud, with Afrino rams, recently purchased from Wellards at Dongara and a new breeding flock of about 300 Multi Purpose Merino ewes.

He is hoping to achieve a plus 130 percent lambing percentage, from smaller frame, easy care animals that also offer an 19 micron wool clip.

The new rams arrived six weeks ago and have adapted quickly, with the advantage of a green pick nourished by good falls of rain last week.

The first new lambs are due in May/June.

Kim employs a local agronomist to keep pace with changing pasture technology and has been using the latest oat/ryegrass/clover mixes as well as lime and fertiliser to maximise production.

He regards Manypeaks as an ideal production area for livestock, because of its assured rainfall and relative freedom from grass seeds .

WAMMCO has previously purchased his lambs on the property, but he is a firm believer in scales and has sold weight and grade over the scales to the cooperative for the past two years.

Kim and Mary Dewar have a grown up family of two daughters and a son.