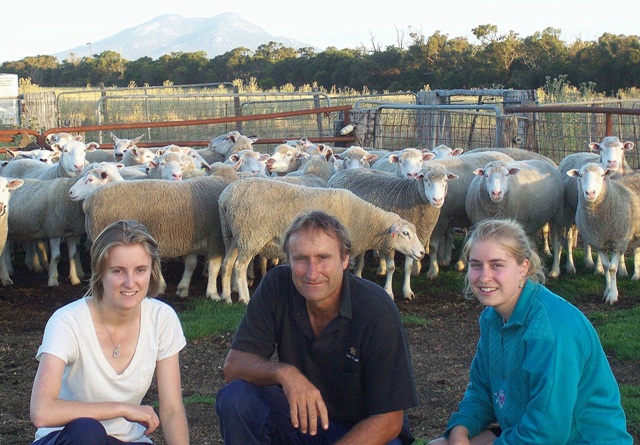 Manypeaks producer Alan Lubcke is moving closer to his goal of producing 2,000 lambs a year from 1500 crossbred flock ewes - set when he moved from Merinos to prime lamb production about six years ago.

As WAMMCO’s Producer of the Month for November 2012, he has reached a crossbred lamb turnoff of 1500 lambs for the year from matings that now include approximately 300 ewe lambs.

“We began mating our ewe lambs four years ago and they are averaging only about 70 percent lambs as the component of a ewe flock that is averaging 110 percent lambs overall,” Al said last week.

“The lower lambing percentage in the ewe lambs is not related to nutrition but is more likely to result from immaturity,” Al said. “It is one of the problems we hope to address when we begin pregnancy scanning in 2013.”

Al said the 204 lambs in the winning consignment processed at WAMMCO Katanning on November 27, were the tops from a mob of 600 lambs.

The lambs had an average weight of 23.48 kg and were valued on the day at $3.41 per kg to return an average of $80.15 per head. 55 lambs in the draft qualified as WAMMCO Select, now discontinued, but which would previously have earned a bonus of $4 per head or $1.08 per head over the entire consignment. Al shore the lambs prior to delivery because he said the wool was worth more in the bale to him than the $4 per skin on offer.

Al said lamb values this year were disappointing, but like most producers he was hoping for some recovery in global demand and price for lamb in 2013.

“Last year we sold no lambs under $120 per head, but this year we are tearing out our hair trying to place lambs at not much more than half that amount.”

Al and wife Kathy have been farming in the south coast environment for the past 30 years. Daughters Samantha 20, who is halfway through completing a Murdoch degree in Animal Science and Nicole, 19 who also attends uni, offer regular help on the 395 hectare “Sunnyside” property at Manypeaks.

He said SAMM genetics acquired at clearing sales when he began crossbreeding about 6 years ago formed the original base of his “maternal flock,” but he has since included Texel, Poll Dorset and White Suffolk genes to the mix.

“I breed most of my own rams, but I will buy in a stud ram if I believe that he has something to contribute. This applied to the purchase of an Ille de France ram this year.

“My aim is to produce a 65 kg ewe with the ability to raise twins, because I have found that a slightly lighter ewe is a much more efficient breeding unit than a heavier one.”

“Sunnyside” is entirely pasture-based on clover and perennial ryes with some kikuyu.

“The new Italian perennial rye varieties such as Winterstar are very impressive, Al said. “We have just finished cutting 350 rolls of silage and 100 big hay rolls off 24 ha, and the regrowth is still green and growing fast.”

He said the processing feedback he received from WAMMCO was of significant value to him in determining breeding strategy.

“I am a shareholder and supplier to WAMMCO, but I also supply stock to other abattoirs that are closer and also provide the essential competition producers must have.”