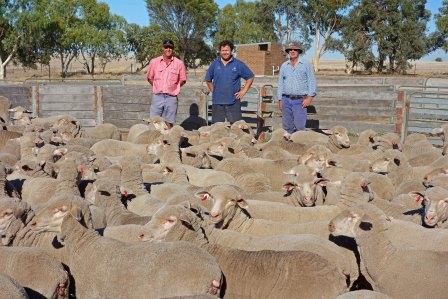 Newly elected Stud Merino Breeders' Association of WA (SMBAWA) president Steven Bolt, Claypans stud, Corrigin, believes there is plenty of money to be made from Merino lambs with an increased number of marketing options now available.

Mr Bolt said there were plenty of marketing options out there now for producers when it comes to selling Merino lambs, if they are prepared properly. “If prepared correctly, there are good returns to be made for Merino lambs when you factor in both the wool and meat income,” Mr Bolt said.

Mr Bolt and his family sent a consignment of 320 April-drop Merino lambs from their Corrigin feedlot to WAMMCO Katanning, last week and were certainly rewarded.

The consignment, included a line of 130 ewe lambs, which were one of two entries received by WAMMCO International last week for the new Merino lamb carcase competition, the Merino Lamb Muster that was launched at the Wagin Woolorama. The line of lambs entered in the competition by the Bolts achieved a dressed weight of 24.4kg and at 500c/kg dressed, returned $122 a head.

An entry form to the competition can be downloaded here.

Mr Bolt said his family had been finishing surplus Merino lambs in feedlots for about 25 years and had been delivering around 800 lambs a year to WAMMCO for the past few years.

“There is increasing concern that rising global demand for mutton and lamb is already outpacing Australia’s capacity to supply, and I can see the dual purpose role of Merinos offering substantial future reward for those prepared to make or increase the investment,” Mr Bolt said.

"Our draft last week of 320 Merino lambs to WAMMCO illustrated the excellent value of their meat carcase to a sheep enterprise.

“We would probably have averaged about $75 per head for these lambs in the saleyard before Christmas.

“They went to Katanning in excellent condition and 320 truck load of ewe and ram lambs averaged $115 a head."

This was the Bolts second draft of 2014-drop lambs to go over the hooks at WAMMCO.

In October they averaged $96 a head for a draft of 400 wether, ram and ewe lambs, straight off grass.

He said there had been a steady improvement in demand for Merino rams in WA over the past two years, with some producers consolidating, and others increasing the size of their flocks.

"The increase in genetic interest had extended to meat and fertility characteristics because producers were weighing up the value of sustained higher values for lamb," he said.

“The Merino ewe continues to represent a big section of the WA sheep flock and it will continue to play a major role in returning sheep production to more sustainable future levels.

“As Merino breeders, we have certainly found that we can produce easy care characteristics with better fertility and meat values in our sheep with minimal impact on wool production.

“It is pleasing to see AWI and WAMMCO joining with us to promote the dual purpose versatility of Merinos in this new Merino carcase competition and I would encourage both commercial and stud breeders of Merinos to support the competition, given the returns that can be achieved by Merino lambs."