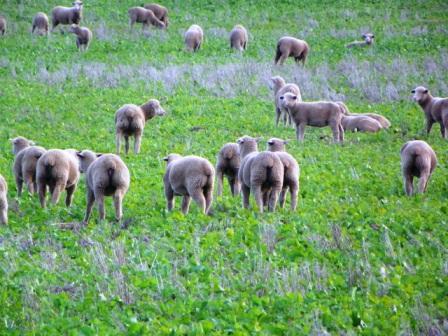 A trial grazing lambs on a mix of canola and clover not only achieved better weight gains than their feedlot in 2010, it also contributed to WAMMCO’s September Producer of the Month title going to Bunkin Farming Enterprises at Dumbleyung.

Dale Cronin and his father Terry, initially came under the prime lamb radar when they won first and second place in the trade weight section, and second place overall in WAMMCO’s recent State Lamb competition with SAMM genetics from neighbouring Rockdale stud.

A line of 111 of their SAMM lambs were processed at Katanning on September 8. They averaged an impressive carcase weight of 24.65 kg and were sold to WAMMCO at $5.96 per kg to return $146.82 per head (including $6 skin value), to win the Producer of the Month title. Fifty lambs, or 45 percent of the consignment attracted a WAMMCO Select bonus of $342.19, or $6.84 per head – equivalent to an extra 12.5 cents per kg over the entire 111 lamb consignment.

Dale had tried grazing lambs on canola in previous years with mixed results, caused by very difficult seasons and other factors.

This year’s excellent season proved a bonanza for a further trial grazing just over 300 lambs, mainly twins, on a canola-clover mix.

With the help of Jonathan England from the Department of Agriculture and Food office in Narrogin, SAMM ewes with lambs at foot were introduced to a paddock of Losa clover, oversown with canola. They went into the trial on July 19 and the lambs were weaned a week later and returned to the trial paddock.

Male lambs of 38 kg minimum bodyweight were retained for the remainder of the grazing trial.

These lambs achieved incredible growth rates of well over 600 grams per day.

Dale said the daily growth rates achieved were well above those accepted for feedlots, and were supported by similar results in their own trial in 2010.

“Grazing canola-clover mix or ryecorn-clover mix and other crops in the right circumstances can produce high daily weight gains with the benefit of introducing a legume, a disease and weed break into our cropping rotation at a reduced cost. Also by focussing on fertility our aim is to profitably produce more lambs from less ewes and have more area to concentrate on cropping. “

The Cronins have moved from a predominantly Merino ewe flock over the last few years to a breeding flock of which 70 percent are now SAMM.

For the first time last year they mated SAMM ewe lambs at 9-10 months .

“We tailed some very nice lambs, and the young mothers have continued to thrive,” he said.

“Our experience with SAMMS is that they are not only suited to the heavyweight market, but offer the potential for early maturity to capitalise on the most favourable prices. They also have high feed efficiencies while growing merino wool.”

The family welcomed the cooperative’s ability to pay a three percent bonus to qualifying members.

While acknowledging the lamb industry has its many challenges, they believe in the sheep industry’s future prosperity and wish other growers a safe and successful harvest.

To obtain more data on the trial contact Jonathan England at Narrogin on 0438958617.