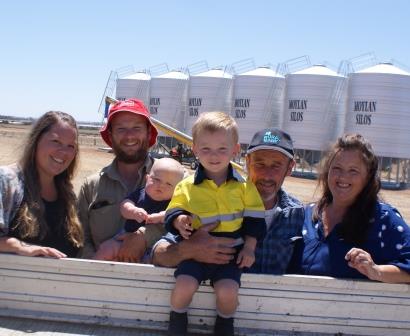 With their Merino ewes returning an average cut of 8 kg of 21.5 micron wool per head and delivering more SAMM/Merino cross prime lambs for record prices per carcase, the Garard family’s sheep enterprise at Lake Biddy is more than holding its own.

Nathan Gilmour returned to Lochgair in Nov last year after 10 years with Elders Finance, and is working with his father Ian Garard to double their prime lamb enterprise within five years.

“Our sheep and lambs provide that welcome regular income base throughout the year with proceeds from lamb and wool that would have been beyond expectation a few years ago,” Ian Garard said last week.

He was commenting on the news that the family’s Lochgair Farms had won WAMMCO’s first Producer of the Month title of the new year, for January 2018.

Their consignment of 184 crossbred lambs included 96.7 percent of carcases in WAMMCO’s premium grade. Processed at Katanning on January 31, they weighed an average of 21.36 kg and returned $136.65 per head including skins.

Elders’ Lake Grace agent, Graeme Taylor, who has assisted the Garard family for some years, said it was pleasing to see WAMMCO’s more flexible ‘sweet spot’ criteria bringing more dedicated growers like Ian and Nathan into the monthly winners’ circle.

He said they were amongst a growing number of mixed farmers in the area who were quietly lifting their Merino ewe numbers and replacing grain crops with pasture based legumes, to increase their options.

Graeme’s mobile pneumatic drafting unit is in regular use on Lochgair, and he was busy well beyond the normal end of October lamb delivery deadline while they addressed the difficult season.

“We had about 500 lambs left at the end of October and held them over on a barley/lupin mix with 5% weaner pellets, through self-feeders before putting them on barley stubble with chaff heaps” Nathan said.

Seeding an extra 80 ha of serradella, vetch and oat pasture this year will be an important step towards increasing their Merino ewe numbers to double the crossbred lamb enterprise.

Both Ian and Nathan appreciate the lamb price stability WAMMCO has assisted in WA via consistent prices and use of the latest processing and marketing technology and say their future expansion plans are based on their confidence that prices will remain sound.

Ian’s grandfather Neil Stewart and his wife Gladys possibly believed that farming in the Lake Biddy area would be similar to the loch country near their home in Scotland when they arrived in WA and took up Lochgair in 1935 between Lake Grace and Newdegate.

They found that not much more than half of the 1,137 acre farm they purchased was arable because of the lakes, but also that the local lakebanks Morrell soils were well suited to grain and sheep production.

Gladys also purchased and ran the Lake Biddy general store and set to building a popular local business. The township of Lake Biddy no longer remains but the store still stands and is now a residence.

Ian Garard took over the Lake Biddy property from his parents Glen & Gaye in 2005 and continued to improve the Merino terminal sire flock started in 2003 when Glen & Gaye purchased the first SAMM Ram for Nathan to diversify into prime lamb production.

After trialling both Texel and SAMM genetics, they settled on a SAMM/Merino formula as basis for the new enterprise, Ross Taylor’s Tiarri SAMM stud continues to supply rams for the current breeding ewe flock of 1,200 Merino ewes which is topped up each year with maiden ewes sourced from M & JA Guelfi at Lake Biddy.

“We rely on the quality wool and large frames of the Guelfi’s Merinos ewes bred from Rams they purchase from Jack and Ivan Lewis’ Lewisdale stud, Corrigin,” Ian said. “Tiarri SAMMS remain the key to our prime lamb business.”

The Merino ewe flock averaged 103 percent SAMM-cross lambs in 2017. The lambing percentage was assisted by chaff carting at harvest, this process creates fodder heaps in the paddock.

“The heaps are a valuable by-product of cropping for us because they increase the amount off food on offer to the ewes and require much less grazing effort to get the grain and weed seeds, which also has an on flow benefit by reducing weed numbers in following crops”