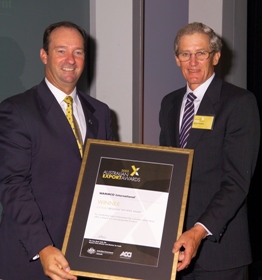 The WA Meat Marketing Cooperative has been named WA’s Agribusiness of the Year for the second successive year, and has also won the title of WA’s 2005 Regional Exporter for the first time.

WAMMCO Chairman Dawson Bradford and Chief Executive Des Griffiths accepted the prestigious awards, hosted by the Department of Industry and Resources, at a presentation at the Hyatt Hotel last Friday.

The Cooperative now becomes a finalist in both categories at the 2005 Australian Export Awards to be presented at the Sydney Convention Centre on December 1.

In accepting the awards, Chairman Dawson Bradford said WAMMCO’s success had been achieved despite a problem the producer cooperative shared with other Award finalists and businesses in WA, -  that of sourcing adequate labour.

Des Griffiths said this week that the awards  recognised WAMMCO’s further success in developing WA lamb exports to the United States by encouraging the production of heavier lambs with better returns to producers.

“The two new WA export awards will make a fitting addition to our annual report to producer shareholders at York on Wednesday, October 26,” he said.