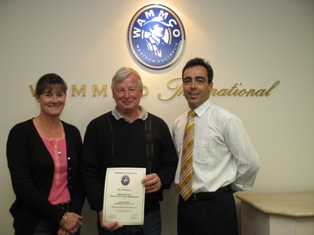 Michele and Beau Waddell of Newdegate did not realise a draft of their SAMM/Merino cross lambs might win WAMMCO’s Producer of the Month title for August before they recently decided to reduce the scale of  their lamb enterprise.

Rising costs and the absence of daughter Sonia and her partner Russell Harding  on an extended overseas trip, had caused the Waddell’s to reduce their farming activities to cattle feedlotting, grain and Merinos for 2008/09.

However a successful two year pasture/cropping rotation, a strong base of  Pallinup blood Merino ewes and a reserve of Quintarra SAMM genetics  remains in place to resume prime lamb production if conditions permit.

The Waddells delivered their winning consignment of  304 lambs to WAMMCO Katanning on August 20.

91.8 percent of the draft was classified premium class with all of the lambs in the fat score 2 and 3 grades,to attract a contract price of $4.10 per kg . Heavier individual carcases in this class realised up to $117.42.

On the cost side discounts for pleurisy, arthritis and ovis on 10 lambs dragged prices for these lambs as low as $50.

The Waddell family are traditional Merino woolgrowers but Beau said his father John had produced Poll Dorset cross Merino lambs for about 20 years through to the 1980’s when a series of droughts caused them to phase out lamb production.

The enterprise was revived in the late 1980’s with an introduction of SAMM genetics, now supplied by Mick and Todd Quinlivan’s Quintarra stud at Esperance.

Beau said whereas lamb prices had been less exciting for the past two years, he had still averaged around $100 for just over 950 prime lambs on four drafts to WAMMCO this season.

He was also an early supporter of the Prime Merino Lamb Alliance and still includes Merino lambs in his annual deliveries to WAMMCO.

A good season enabled this year’s lambs to reach target weights on pasture.

“We mate in August and aim to deliver our lambs  in August, using an opportunity feedlot for 800 lambs if necessary, to keep pressure off the pastures in difficult seasons.

“Good early rains and warm conditions allowed Nungarin.Dalkeith/Serena Medic pastures to regenerate well after a two year cropping phase and these were the base of our lamb production this year.”

Beau said the family shareholding in WAMMCO had been building steadily and he had been a consistent user of supply contracts, - depending heavily on them in years when the feedlot was in use.