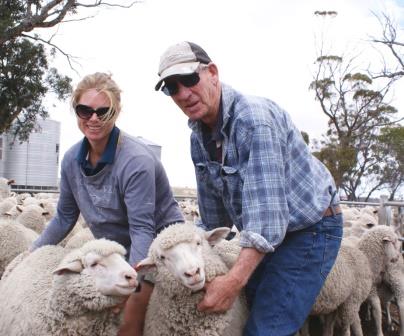 Nyabing Dohnes On The Money

The chance purchase of a flock of 1,400 F4 mated Dohne ewes from breeder Keith Henderson eight years ago gave Nyabing/Wagin farmer Graham Ball and his family a base for the profitable, easy care, prime lamb flock they were seeking at the time to replace their Merinos.

Under the direction of daughter Michelle at Nyabing, they have since used Dohne rams from Peter Dewar's Strathaddon stud to develop their pure Dohne enterprise, with White Suffolk rams from Ditchburn's Golden Hill stud at Kukerin to upgrade prime lamb progeny from their crossbreds.

"We were lucky starting out with a flock of F4 mated Dohnes for little more than we were paid for the Merinos we were replacing," Graham said.

"We were able to move straight into a breed that could give us both meat and wool, a high lambing success rate, better foraging and freedom from blowflies and crutching," Michelle added.

"Newborn Dohne lambs can surprise you because there are many twins and triplets and they are initially so small, but once away, their growth and survival is impressive and even our maiden ewes are averaging 110 percent or more at lambing," she said.

"They will also forage on granite country and other country neglected by other breeds."

The family sheepbreeding enterprise is based at "Warnaminup", Nyabing with a total Dohne flock that has now grown to around 3,000 ewes.

The Dohne mothers are cutting around 5.5 kg of 21 micron wool and along with weaner-shorn lambs are also enjoying the current premiums for shorter wool.

Michelle said selected Dohne ewes were mated at the end of October to White Suffolk rams to lamb in early April, while the Dohnes rams were mated to lamb in mid May.

She and Graham welcomed the record WAMMCO rebate in October and were optimistic about the future of the lamb industry.

They have not taken the cooperative's offer of a $5 per kg minimum contract because for the second consecutive year there has been an abundance of feed at Nyabing and also at "Ballaying Farm" at Wagin, and they are confident prices will remain buoyant.

Wagin serves to 'top up' lambs for sale, and when necessary, to hold breeding ewes in condition so that they can drop their lambs onto green pasture back at Nyabing.

"My wife Ronnie and I run the cropping program on about 75 percent of the properties while Michelle manages the sheep enterprise. The abundant seasons and the timely excellent returns from lamb are currently working well in our favour," Graham said.

"We collect our own clover seed and are progressively improving our pasture between crops," he said.