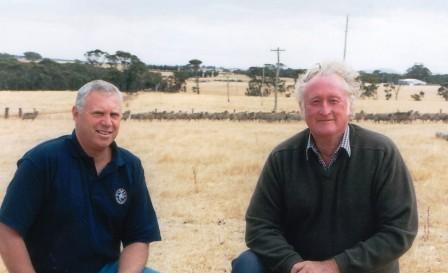 On-Property Lamb Option Worth Waiting For

A long tradition of mating big numbers of Merino ewes to Poll Dorset rams, and the option of selling crossbred lambs off their mothers, on-property to WAMMCO on a fixed price - no grade basis as well as weight and grade, continues to pay significant dividends for Mt.Barker/Kojaneerup producer and former WAMMCO director, Bruce Wright.

Bruce and son Graham are amongst WAMMCO’S biggest lamb contributors, averaging around 7,500 crossbred lambs again in 2012. The family also crops 1,000 hectares of canola and another 1,000 ha of barley and is progressively increasing the area of kikuyu pasture on the Kojaneerup property.

“I was a strong director advocate for a lamb price on-farm, because I believed WAMMCO’s previous system of weight and grade selling only, was too restrictive for many producers,” Bruce said last week.

“Many of those producers have since become members and contributors to WAMMCO , especially those selling in the Spring lamb flush, substantially helping the cooperative to increase the volume and diversity of its product.”

Bruce was elected by shareholders in 2003 and served on the WAMMCO board until his retirement in 2010.

The Wright family’s Kojaneerup property recently delivered a single consignment of 2092 crossbred lambs to Katanning on April 24 that weighed an average of 24.35 kg and returned $119.32 kg per head.

The Merino/Poll Dorset cross lambs were delivered in three road trains after being drafted by WAMMCO buyer Wayne Radford, who also negotiated the on-property price of $4.70 per kg.

“We received good December rains that generated excellent regrowth in our barley stubbles, as well as strong growth in a 40 hectare area of kikuyu, to carry the lambs through in such great weight and condition.”

Bruce said he and Graham mate about 9,000 Merino ewes each year, - just over 7,000 to Poll Dorset rams from the Hillcroft and Brimfield studs, and the balance to Merino rams from the local Billandri Merino stud.

“We have sacrificed a little with the Merinos on the number of lambs we drop, but the improving wool price this year returned an average of $40 per head from the ewe flock.

“The difficulty now, with so much crossbreeding taking place, is to find enough suitable replacement Merino ewes,” Bruce said.

The former director expects Spring lamb prices in WA to average about $80 per head this year and believes the price should still be attractive to producers. He also maintains that WAMMCO rebates should apply to shareholder lambs sold on-farm.

“Compared to the $30 or so we were receiving not so many years ago, and the currency, overseas demand and other problems now facing the industry, I believe  WAMMCO will be doing well  to hold values at an $80 per head average.”