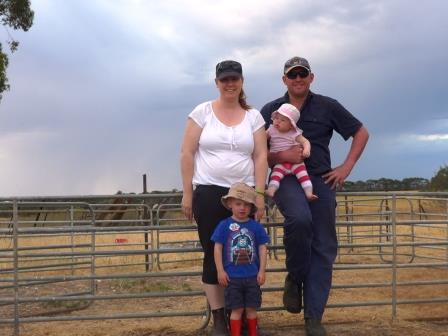 Brendon and Ros Tyrrell have made relatively few changes to their prime lamb enterprise east of Scaddan, since they last won WAMMCO’s Producer of the Month award in January 2013.

“The main change is that we are now using more White Suffolk rams over an increasing percentage of third cross SAMM ewes, to produce lambs like those that have just won WAMMCO’s September 2015 title for us,” Brendon said this week.

The Tyrrell’s Swandale Investments submitted a line of 260 SAMM/White Suffolk lambs that weighed an average of 22.12 kg to return an average of $113.76 per head including skins. The lambs were processed at Katanning on September 30 and included a good percentage of top-rated carcases, with some worth up to $139.76.

Brendon said early June was looking grim, when 80 mm of rain over five days from June 20 kicked crops and pastures to life. Good follow-up rains in July and August secured the season with clover based pasture paddocks easily accommodating the 900 SAMM cross and 300 Merino ewes and their lambs.

The Tyrrell family have maintained their WAMMCO shareholding to match their turnoff and have welcomed the bonus issues delivered by the co-operative over the past few years.

“We are hoping WAMMCO can keep lamb prices around $5 per kg and are surprised that more producers are not taking advantage of the solid returns.

“Our dipping contractor recently reported a small gain in district numbers, but we are still amongst very few lamb producers within a 50 km radius of here,” he said.

A dispersal sale for Esperance Rural Properties in 2003 assisted Brendon and his father Greg to switch their sheep enterprise from Merino to SAMM.

They continued buying SAMMs from Mick and Todd Quinlivan’s Quintarra Farms, before moving to Haydn and Mark Edward’s Rockdale stud which was taken over by Simon Kerin’s Ashbourne stud at Katanning three years ago.

Nathan Ditchburn’s Golden Hill stud at Dumbleyung has been the source of White Suffolk rams, servicing 300 third cross SAMM ewes. The prime lamb flock is self supporting with first and second cross ewe lambs being kept each year.

The family has maintained an enterprise mix of 2,600 hectares cropping to 700 ha of pasture and counts on stubbles and good seasons to prepare their lambs if possible without supplementary feeding. Father Greg also maintains a flock of around 300 Merino ewes as well as keeping watch on the prime lamb enterprise.

Sales of lambs have been managed for the past four years by Barry Hutcheson of Primaries Salmon Gums.

Since their last POM win, now three year-old son Ethan has been joined by little sister Aleisha, who is nine months of age.