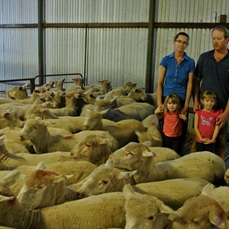 Introducing rye corn as a cereal pasture crop and working to improve the survival rates of their SAMM twins are two of the ongoing missions Dumbleyung lamb producers, Dale and Terry Cronin are using to reduce costs in their sheep operation.

Their Bunkin Farming Enterprises has just followed its inaugural September 2011 success as winner of WAMMCO’s Producer of the Month, with the title for March 2013.

"The financial difference in being WAMMCO’s producer of the Month for September 2011, and March 2013 is around $60 per head less on a similar line of lambs with a similar average weight," Dale Cronin said this week.

"That means that we have had to alter course to reduce sheep costs and to try to maximise our returns."

"Last year, mainly because of the diminishing incentives to produce lambs out of season, we moved lambing from April to July, and changed from lot feeding to paddock feeding with lick feeders because it involves less labour and seems to result in less stress on the animals," Dale said.

"We also decided not to mate ewe lambs this season but will consider doing so again if prices improve."

The mating program this year was similar to last year, - about 2,200 SAMMS entirely based on Rockdale genetics.

Jonathon English from the Department of Food and Agriculture in Narrogin encouraged the Cronins to introduce rye corn as a cereal pasture and then as a brown manure crop with some excellent results last year.

"This year, we seeded about 80 ha of rye corn at Easter after 44 mm of rain in March and it germinated in 4 days and is still holding on well," Dale said last week.

They continue scanning and selecting for twins, but have shifted the focus to improving twin survival rates.

Dale says the removal of WAMMCO Select is a significant loss to producers not only as a production yardstick, but also because of the incentives it provided. The bonus on his March 2013 draft would have added $4.10 per head on 41 qualifying lambs.

"Many producers who have invested in quality lamb production and out of season lambs and who have stayed loyal to WAMMCO because they recognise the vital role of the cooperative, are hoping that they will continue to supported in the future, and that an upward price trend can continue."