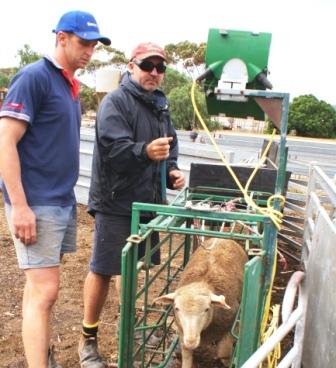 Agisting lambs on the summer-rain-affected crops of a Jerramungup neighbour, not only assisted Simon Cullam to cut the summer feed costs on his SAMM lambs, it helped him and wife Helen to take out WAMMCO’S Producer of the Month title for April 2012.

Their Cullam SAMM enterprise sent 253 wether lambs to Katanning for processing on April 4, averaging 23.35 kg per carcase to return $110.70 per head including a $3.61 skin.

A saleyard oversupply of lambs in April brought prices down from the levels Cullam receivedfor its winning Producer of the Month consignment in March 2011, but an extra 0.46 kg per head of bodyweight helped to compensate. Earlier sales of cfa breeding ewes at around $130 per head on the farm the previous spring, also helped to balance the livestock budget.

Capacity bookings at Katanning in March have since resulted in a subsequent consignment of Cullam lambs being sold to a Bunbury processor.

“We were able to benefit from our neighbour’s crop residue and summerfeed by utilising his stubbles. This made a big difference to our feed costs and helped the neighbour by cleaning up weeds and volunteer crops.”

Simon said the ewe lamb sisters to the wether lambs in the winning consignment had already been mated and was continuing to progress to his target turnoff of around 3,000 lambs per year.

SAMM influence in the commercial flock continues to grow, whilst at stud level, he is closely watching the performances of a number of other SAMM breeders in order to improve the Cullam genetic base. “We have been virtually a closed stud since Cullam joined the SAABCO syndicate to import SAMM embryos from South Africa in 1997, but I am keen to see that we stay at the forefront via continual performance recording and assessment,” Simon said.

Last year’s on-property sale saw a total clearance of Cullam rams at an average of $920, with a number of new buyers joining existing clients.

His neighbours, and consistent clients of the Cullam Samm stud, Graham, Chris, Wayne and Marie-Claire Barrett, followed up their win in the 2011 carcase competition for consignments of more than 300 lambs, with second place in this year’s competition in the Trade Weight section.

Simon has leased more land for cropping and grazing this season and has increased his stocking rate to 5.2 sheep WGHA to increase turnover. He has been looking at soil nutrition, growing crops for grazing as well as grain, and sowing ryegrass to boost pasture production.

He said he was reassured by the comments of WAMMCO CEO Coll MacRury at the recent carcase competition, that the lamb industry would ‘transcend’ its current difficulties with the Australian dollar, supply inconsistency and price resistance in consuming countries.

“WA producers have realised that sheep can add significant value to their enterprises, but there will need to be secure price stability before serious growth continues. We are very proud of the fact that we are consistently producing a quality product that is also recognised by our processor.”