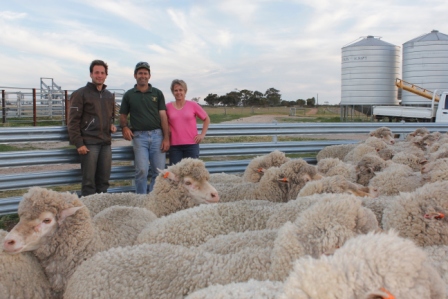 The addition of a new 2,400 ha farm at South Needilup four years ago, further genetic progress with their SAMMs and Dohnes, a stabilising wool market, and a bumper season have been welcome morale boosters for Greg and Annette Cake, WAMMCO’s Producers of the Month for September 2013.

The Gairdner River farmers last won WAMMCO’s award in September 2009, and whereas lamb prices have been up since, back down and up again to around 2009 levels, Greg believes there is plenty of room for optimism in the lamb industry.

A rebate cheque from WAMMCO in August, served as part compensation for last season’s lower prices, and the good start to this season has enabled March drop lambs to be sold straight off their mothers at sound prices.

From a traditional sheep/cropping family, he has kept a balance of pure Merinos on the property continuing to source rams from the local Canowie stud of Jason and Rod Griffiths to mate about 1650 Merino ewes.

A further 2,800 ewes are mated to Dohne rams from Kim and Colleen Parsons at Jerramungup and to SAMM rams from Rocco De Bellis at Katanning. The Dohne ewe lambs are kept for breeding, whilst the SAMM ewe lambs are generally dispatched to Katanning when they reach 50kg live-weight (approximately 22kg dressed weight).

The winning September 2013 entry of 362 new season lambs was selected and weighed by local Landmark agent Neil Foreman and was processed at Katanning on September 26. They averaged 22.98 kg and returned $100.50 per head including $5.36 for the skin, with individual animals bringing up to $124.

More than 60 percent of the consignment made the 18.1 to 24 kg, fat score 2-4 category, and about a third of the draft would have qualified for a WAMMCO Select bonus payment.

Greg says the current season is by far his best for five years the extra land at South Needilup has left him slightly understocked.

The South Needilup and Gairdner properties will turn off about 2700 lambs to WAMMCO and local processors this season.

The Needilup property was cropping — only for five years before being purchased by Greg and Annette Cake, and they had to restore more than 20 km of fencing during the first two years along with considerable dam and water catchment improvements.

A bonus was that a good sub-clover base returned with the change in enterprise back to sheep and cropping.

“South Needilup tends to get better rainfall than Gairdner and our current wheat, barley and canola crops are the best since about 2005.”

Greg has welcomed the ongoing improvement in wool prices but says his quickest and best returns are from SAMM and Dohne lambs at about seven months.