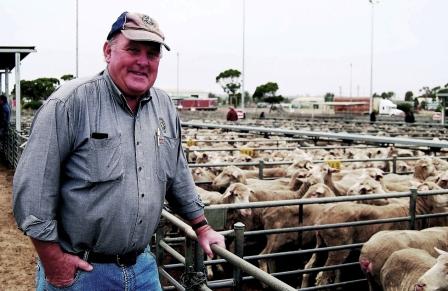 Sheep buyer hangs up his boots

After 50 years of working as a livestock buyer, industry stalwart Brian Norsworthy, also known as Beast, has hung up his boots.

Like many of his peers, Brian has seen the industry overcome challenges and evolve. His retirement comes as prices are at all-time highs as the forces of supply and demand reward farmers who have stayed in the game.

As a “small cog in the wheel”, Brian wanted to make a quiet exit from the industry but his involvement has been phenomenal. He has covered millions of kilometres, attended more than 2000 sheep sales, bought millions of sheep and, in one year alone, purchased $14.6 million worth of livestock.

Brian started his career as a 17-year-old trainee for two South Australian buyers when he was too young to join the Royal Military College of Australia at Duntroon. His love of travelling across the countryside to meet friendly people, combined with his sporting prowess on the football field and golf course, plus an eager thirst for beer, has made him one of the most recognised buyers in the State.

He crossed the border 42 years ago on a working holiday and married Kerry, one of the best cooks in the district, and raised Simon and daughter Pippa.

On the work front he’s been a part of buying teams, processors and exporters, including Globe Meats, Metro Meats and WAMMCO, and was a part-owner of Kojonup Abattoir before it closed. He’s seen, first-hand, improvements across the industry, from farm gate management of sheep to improved transport standards and carrying capacities, improvements by processors and at livestock shipping depots. Even the introduction of two-way radios and the mobile phone have had a major impact. There have also been huge changes in how the lamb industry operates, including the establishment of the WA Lamb Marketing Board, WAMMCO’s predecessor, in 1971 by the State Government. At the time, every lamb was compulsorily acquired at slaughter and a minimum price guaranteed. While Brian believes it held the industry back, when the free market system was restored he happily joined WAMMCO.

There have also been advancements in the sheep industry, with new genetic technology from South Africa and New Zealand, such as the Samm, Dohne and Dorper. While some introductions had been hit-and-miss, Brian said you couldn’t get away from the fact that the Merino was an excellent sheep. “It can handle most conditions, can produce, with good management, a good product, and it has done the industry well for hundreds of years,” he said. Industry-wide, Brian said lambs were heavier than 30 years ago and in the past decade, lot feeding and supplementary feeding by producers had risen because little stubble was left. Prices had also fluctuated. “I remember when shipping wethers in wool first hit $50,” Brian said. “I bought for Davidsons from Kukerin for $50 a head and Colin Combs at Pingrup for $50 head. “Everything flowed along, then they hit $100 per head, then lambs were making $100 and more. “High prices are fine to talk about but, as an industry, the average should be looked at because that is where you get your yardstick from and is a more accurate assessment of where the product is at.”

During his last sale at Katanning on March 30, trade mutton for the domestic market hit $4/kg, the highest Brian has seen. And for anyone thinking about being a buyer, Brian said it was an exciting and rewarding industry, the key was to enjoy what you were doing. “There are some fantastic people right through the industry from the farm to freezers,” he said. “It’s outdoors, every day is different and it’s a challenging industry that’s subject to change at any time — I’ve enjoyed it.

“I’d just like to thank all the staff, farmers, agents and transport companies over the years for their support and everyone in the industry. “I wish them all the best for some top years ahead.”