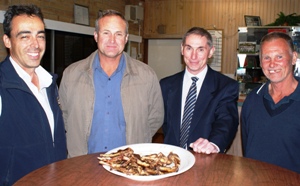 Signals from the AGM

WAMMCO Chairman Dawson Bradford and CEO Coll MacRury warned of little lamb market improvement, but gave some positive signals to shareholder producers at the Cooperative’s 2011/12 AGM at Beverley on October 31.

Dawson said prompt action by the Board in January to change the administration and pricing structures of the cooperative as well as an initial trading bonus from Goulburn, had averted a more serious loss than the $885,000 recorded.

He said whereas there were no immediate signs for recovery in a global lamb market that was still awash with product, he remained  optimistic that WA producers and their cooperative would ultimately ‘win through.’

Key points made by Dawson and Coll included:

Further details on the AGM and WAMMCO’s plans for the coming season are available from WAMMCO’s buyers, Peter Krupa, Wayne Radford and Rob Davidson.

The goal of owning an Australian sheep farm in a solid area, has brought some notable achievements along the way for New Zealander, Stacy Williams, who started farming near Kojonup ...

Twelve months as a Director of WA’s Meat Marketing Cooperative has given North Stirling sheep and lamb producer Bill O’Keeffe some important new perspectives on the ...

Promising seasonal conditions and improving sheep numbers in the Borden/Stirling Range area have sparked optimism for higher levels of lamb sale activity in the area this season, prompting WAMMCO ...

A rare opportunity for WA’s prime lamb producers to benefit from a direct link with the processing and marketing side of the meat industry, is a unique feature ...