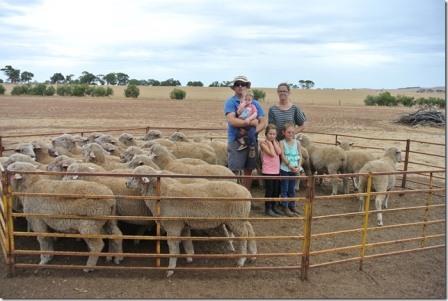 Scoring WAMMCO’s bonus rebate on all of their lambs, on top of good prices, another abundant season with good results from rye corn pasture/brown manuring and being able to sell oats for more than the cost of pellets, were highlights of the season for WAMMCO’s producer of the month for February, Dumbleyung producers Terry and Dale Cronin and their family.

Their Bunkin Farming Enterprises returned to WAMMCO’s ’winners’circle’ for the first time since March 2013 with a line of 103 F1 SAMM cross Merino lambs that averaged 22.16 kg for a per head return of $109.86 including skins.

Dale said this week that the lambs were his first consignment to WAMMCO for the season and comprised a higher percentage of SAMM x Merino lambs.

He welcomed a return to stable prices, comparing the $3.44 per kilogram return he received for 24.52 kg lambs in March 2013 with the $4.96 per kg for the lambs processed at Katanning on February 4.

Dale and his father Terry bred Peppin Merinos with an infusion of Collinsville blood under a Bunkin stud label for some years before moving to SAMMS from the neighbouring Rockdale stud.

Our investment in SAMMS continues to pay dividends and we are constantly refining our breeding and management,” Dale said.

“We have found that selecting for slightly higher fat score SAMM rams can produce lambs that maintain better condition over the summer.”

He said lambing percentages continued to improve and were currently averaging around 114 percent. An extra 370 pure bred SAMM ewes, including 165 Gulnare stud ewes , were purchased and added to this year’s mating program which included 2,000 pure SAMM ewes.

Dale remains a strong supporter of the WAMMCO Select bonus system introduced by WAMMCO in 2009 and abolished in 2012, because it rewarded growers who provided the cooperative with a higher yielding, more profitable carcase.

The Cronins constantly receive compliments on the taste and tenderness of SAMM lamb and look forward to those and other attributes being included in an future premium incentives for growers considered by WAMMCO. They also prize their third Producer of the Month title, despite the knowledge that their lambs may not have been the best, because all previous winners within 12 months are deemed ineligible.

“Perhaps it is time for a review of the Producer of the Month assessment process to ensure that the very best lambs delivered to WAMMCO each month are recognised as winners,” Dale said.

From a small 80 hectare trial of rye corn pasture/brown manuring in 2012/13, the family is planning to sow 400 ha this year , reflecting the integral role this crop now plays in the cropping and sheep rotation.

Terry and Dale and their wives Lyn and Suzanne continue to take a keen interest in the WAMMCO State Lamb Carcase Competition. They won first, fourth and fifth placings last year and intend to enter again for the 2015 event.

Dale said he also sent Merinos from his 300-ewe Merino flock to WAMMCO last year and was interested in the Merino-only lamb carcase competition recently announced by WAMMCO, AWI and the SMBA of WA.

This contest is entirely separate to the major State event and will carry prizemoney of around $7,000, for eligible lambs delivered to WAMMCO Katanning between April and June.