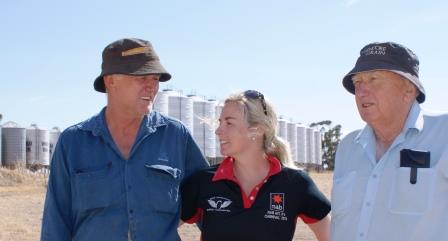 Timaru SAMMS Back On Top

Changing profit margins and poor wool prices have seen the Alexander family of the 8,000 hectare ‘Timaru’ mixed farming enterprise at Beverley halve their wool and lamb flock numbers in favour of more grain production over the past two years.

It was Timaru’s first line of 181 SAMM lambs for the year that won WAMMCO’s January 2015 Producer of the Month award, averaging 23.6kg for a return of $117.64 per head including skins, to a high of $142 for the top animals. Seventy percent, or 126 of the 181 lamb draft met the former WAMMCO Select qualification.

The family’s second property at Quairading now concentrates entirely on grain whilst both the lamb and wool operations have been confined to Timaru and integrated with cropping to minimise labour and logistic costs.

“We have made the change because of higher current profit margins for grain, but I am retaining our sheep infrastructures and the flexibility to retain more SAMM ewe lambs to rebuild numbers quickly if conditions change.”

A policy of reseeding pasture paddocks with oats and clover ‘when they need a break’ also continues to be integral to overall management strategy.

Tim has continued to run a two tiered feeder system on Timaru that enables him to maximise his lamb returns and to better combine the lamb and cropping operations. He has moved away from a Suffolk influence in the lamb breeding system, in favour of SAMM rams from near neighbour Jeff Murray over the Merino/SAMM flock.

“The June drop lambs are weaned and shorn in October and go onto our best stubbles.

“They are mustered after harvest and drafted according to age and size with the tops going on to grain feeders for finishing and delivery to WAMMCO. Lighter lambs are returned to stubble and the second line of feeders until their condition warrants final preparation.

“We set a schedule with WAMMCO in October for monthly deliveries of lambs to Katanning between January and July, and generally manage to stick pretty close to it,” Tim said.

“Our scales broke down as we were drafting off the first January consignment of lambs and because our weights are often deceptive, WAMMCO’s Wayne Radford and Rob Davidson offered to assist with the drafting. Both their estimates were below the actual 23.6 kg carcase average, confirming the need for drafting scales.”

The Alexanders also compared selling mutton by weight and grade to WAMMCO last year with their returns from selling on-property. The results of the trial will see more sales to WAMMCO over the scales, also qualifying for the cooperative’s rebates on mutton as well as lamb.

Tim regards the air handpiece he now uses in conjunction with an air crutching cradle as one of the best labour-saving advances for some time.

“We always clean up each consignment of lambs before delivery and the handpiece makes handling the SAMM lambs much easier,” he said.

Another special bonus is that daughter Jenelle, a Muresk graduate, has taken leave of absence from rural banking to return and help out at Timaru.

Jim Alexander was dairy farming at Waroona before he sold out to Alcoa and purchased Timaru at Beverley in 1977. Tim graduated from Narrogin Agricultural College with the sheep/cropping ‘basics’ to assist his father in developing the new Beverley operation.

Jim was awarded a life membership of WA Farmers mainly for his work with Mike Norton, Jeff Murray and others in guiding the lamb industry through deregulation in 1999.

They were key players in getting the Court government to form a producer cooperative by merging the former WA Meat Corporation and Metro Meat to form WAMMCO in July 1999.

“There would be few lamb producers disagreeing today that the cooperative was the best way to go,” Jim said last week.