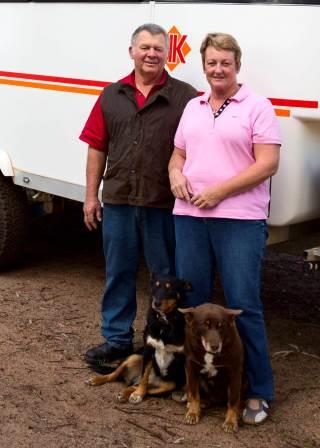 A return to higher lamb and stud ram prices, and to an abundance of local killing space, another bumper season and the successful sale of their Gulnare SAMM stud, have made a fitting industry exodus for dedicated Dumbleyung sheepbreeders Phil and Christine Bairstow.

"Winning WAMMCO’s producer of the month title for July 2014 was an unexepected final fanfare," Phil said this week.

The couple’s last commercial line of 376 SAMM lambs was processed at Katanning on July 9. The lambs averaged 23.68 kg and returned an average of $139.75 per head with individual heavyweights scoring up to $174.55. An impressive 76.9 percent or 289 of the lambs in the draft qualified as premium under the WAMMCO Select formula.

A WAMMCO Producer of the Month win in June 2012 was a previous highlight for the relatively young SAMM Gulnare enterprise, but Phil and Christine’s enthusiasm for the sheep business took a knock in 2013 when they were unable to get bookings for outstanding lambs and were forced to accept significant costs.

However there was some consolation at the 2013 Wagin ram sale when Gulnare sale averages lifted by $200 from the previous year. This included a ram sale to new clients at $1,400.

And thoughts of a Bairstow retirement were already developing when Sandy and Alan Forbes of Royston SAMM stud, Jerramungup appeared as buyers for Gulnare at Dumbleyung.

"The transfer of stock to Royston is already well under way and we are delighted that our work with SAMMS will be continued by such accomplished breeders,” Phil said.

"I understand that Royston will be moving closer to Albany and will continue to specialise in SAMMS for the higher rainfall areas.”

Phil said their decision to go into SAMMS after a costly total cropping experience in the late 1990’s had been a turning point for the family.

"The sheep have remained secondary to cropping, but they have been integral to the enterprise and will certainly provide a boost to our retirement plans.

"I believe SAMMS have assisted WA breeders to achieve the heavier lamb weights that enabled WAMMCO to capitalise on the North American market over the past decade, and that they will continue to play an important future role.

"They are difficult to present as suckers in years of late break but they run well on stubbles and can be topped up to good weights without much risk of running to fat. In a good season like the one we are currently experiencing , the SAMMS perform well as suckers.”

There will be a final offering of 30 Gulnare SAMM rams by Phil and Christine at the forthcoming Wagin breeders’ sale on September 17.

Then the plan will be to subdivide and sell some of the farm, retaining the homestead block as the base for future caravan and other excursions into retirement .