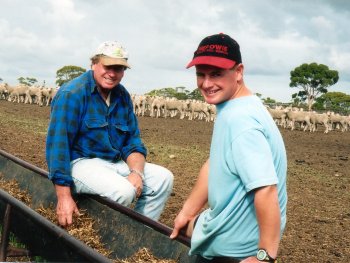 When the Jensen family of “Uralla”, Pingaring were last WAMMCO Producers of the Month in January, 2009, they were the first producers to be judged under WAMMCO Select criteria, just after the system was introduced. They also scored a WAMMCO Select bonus of $4.87 per head on 60 lambs, or 48.4 percent of their consignment, to win the title.

Their first 2012 consignment of 222 lambs to Katanning, soon after the plant reopened in September, retained the benefit of the WAMMCO Select evaluation system but missed a bonus payment because the incentive scheme had just been suspended by the Cooperative.

WAMMCO Select bonuses were shelved because the world lamb downturn removed the premium for quality previously available on these high-yielding lambs.

“The returns were very similar to 2009, even without a WAMMCO Select bonus that would have pushed our average well above $100 per head,” Peter said this week.

He was philosophical about lower lamb values but commended WAMMCO for the role the cooperative plays in underwriting producer prices and services.

“Our feed situation was approaching desperate when ‘it forgot to rain’ after the opening in May, and Peter Krupa was able to get us a booking for the first week after Katanning re-opened,” he said.  “We try to stick to a program and to do it to our best ability and I think our planning consistency is recognised by organisations like WAMMCO.”

The Uralla sheep flock has been based on Nepowie Poll Merinos for many years, but the Jensen family went into breeding Prime SAMMS in 1999 and registered the Uralla stud in 2000. They recently held their tenth annual on-property sale.

They now join about 46 percent of their ewes to Poll Merino and 54 percent to SAMM rams and have confirmed that their Merino ewes not only give them frame, but also fertility.

“We plan for a first drop of SAMM cross lambs in April/ May and use the same rams to cover the balance of the ewes for a second drop in June/July.

“Most of the first drop was weaned as early as possible in July because of the deteriorating season and these lambs were barely five months old when slaughtered. Older ewes were the first to have their lambs weaned and 304 of our six plus years old mothers were sold in the saleyards for an average of $79.43.”

Peter said Merinos and crossbreds were entirely compatible and made timely contributions to cashflow.

“Our Merinos cut 7.5 kg of wool last year to return an average of 815 c/kg, and ouraverage lambing with SAMM rams was about 112 percent with some groups going as high as 128 percent.”

“Uralla” lambs have again been entered in the 2012/13 Lamb Carcase Competition and Peter has welcomed the return of WAMMCO supply contracts for April, 2013.

“We have not used contracts for some years, but it is good to know there is a minimum price available from WAMMCO if the market instability continues.”

The September 2012 title win is the family’s third, their first being for April, 2005. ‘Uralla’ was also second overall in the State Carcase competition in 2003/04 and is regularly amongst the higher point scorers.